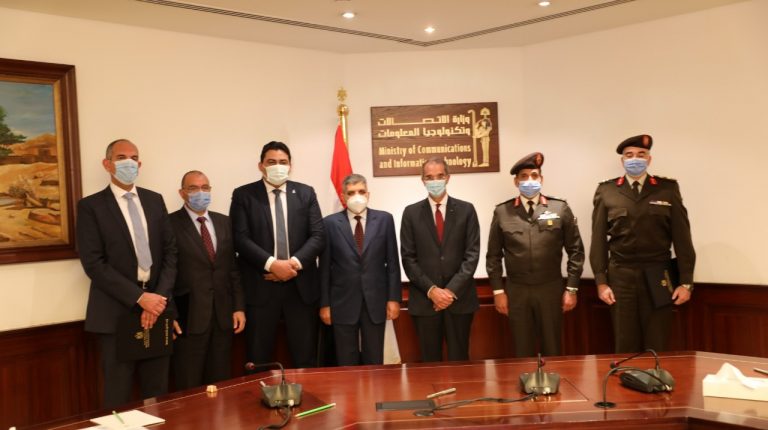 Egypt’s Minister of Communications and Information Technology Amr Talaat has signed an agreement with Osama Rabei, Chairperson of the Suez Canal Authority (SCA), and Tariq Al-Zahir, Director of Signal Administration.

The agreement will establish a new path for fibre-optic cables for internet services between the Red Sea and the Mediterranean Sea via the Al-Morshedeen Road.

The contract aims to strengthen the international position of Egypt as a major crossing point for international communications traffic between Asia, Africa and Europe.

It also aims to take advantage of the Suez Canal’s unique geographical location by constructing several secured ground paths through the Al-Morshedeen Road.

It will confirm Egypt’s developmental and pivotal role in the communications and information technology sector.

The contract comes within the framework of strategic and constructive cooperation between the various vital sectors in the country.

It is the culmination of the joint cooperation protocol that brings together the Ministry of Communications and Information Technology, the SCA, and the signal administration, which was also signed during the meeting.

According to the contract, the three parties will cooperate to lay fibre-optic cables through the guides route on the Suez Canal. It will connect TE’s infrastructure networks and pass international cables and provide their services.

It comes as part of the efforts to develop the infrastructure of the international communications network of TE.

This step comes as part of the company’s strategic plan to take advantage of the Suez Canal campus path, which is characterised by the highest levels of insurance.

It is also the shortest ground connection paths between the landing points in Suez and Port Said, thus joining the group of TE routes to link international traffic between Asia, Africa and Europe. It also links these routes to Telecom Egypt’s infrastructure network.

The step comes in addition to the formation of an integrated and highly efficient terrestrial network, in order to enhance Egypt’s position strategically as a main centre for crossing international communication cables.

Opinion| Our Mediterranean story must continue to be one of hope