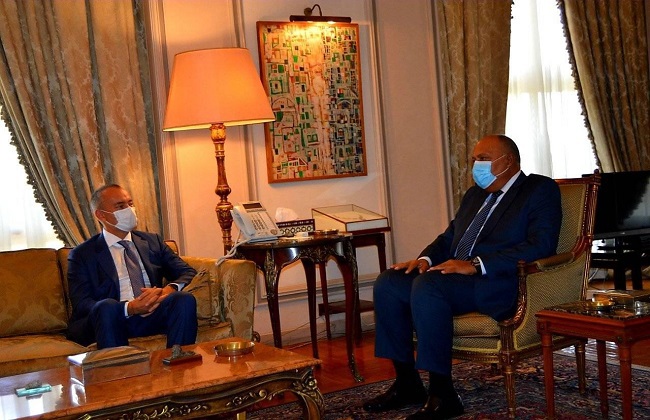 Egypt’s Foreign Minister Sameh Shoukry received, on Wednesday, the UN Special Coordinator for the Middle East Peace Process Nickolay Mladenov to discuss the latest developments to the Palestinian Cause.

During the meeting, the two sides also discussed the opportunities for re-engaging the concerned parties in stuttering peace negotiations.

Ahmed Hafez, Spokesperson for Egypt’s Ministry of Foreign Affairs, said that Shoukry reaffirmed Egypt’s steadfast position on supporting the Palestinians people’s legitimate rights to establish an independent state based on the 1967 borders. This would be undertaken based on the principles of the two-state solution, and in accordance with international law.

Shoukry added that Egypt is keen to provide all support to the UN envoy’s efforts aimed at reviving the peace process, and achieving stability and security in the region.

Hafez added that Mladenov was keen to brief Shoukry on his latest endeavours with the various parties concerned. As part of this, discussions took place regarding ways “to advance the peace process in order to achieve security and stability for all countries in the region”.

Mladenov also expressed his keenness for continuous coordination with Cairo in this regard, and his appreciation for Egypt’s role in supporting a lasting solution.

Also on Tuesday, the Palestinian News and Information Agency (WAFA) reported that Israeli forces notified a Palestinian national that residential tents would be removed in the Al-Farisiya village, east of Tubas city, in the northern Jordan Valley.

Motaz Bisharat, the PA’s official in charge of monitoring Israeli settlement activities in the Jordan Valley, told WAFA that Israeli forces handed Raddad Daraghmeh a notice to demolish his residential tent in the village.

The valley, which is a fertile strip of land running west along the Jordan River, is home to about 65,000 Palestinians, and makes up approximately 30% of the West Bank.

Israel has, since 1967, transferred at least 11,000 of its Jewish citizens to the Jordan Valley. Some of the settlements in which they live were built almost entirely on private Palestinian land.

The Israel military has also designated about 46% of the Jordan Valley as a closed military zone since the beginning of the occupation in June 1967. It has since been utilising the pretext of military drills to forcefully displace Palestinian families living there, as part of a policy of ethnic cleansing and stifling Palestinian development in the area.