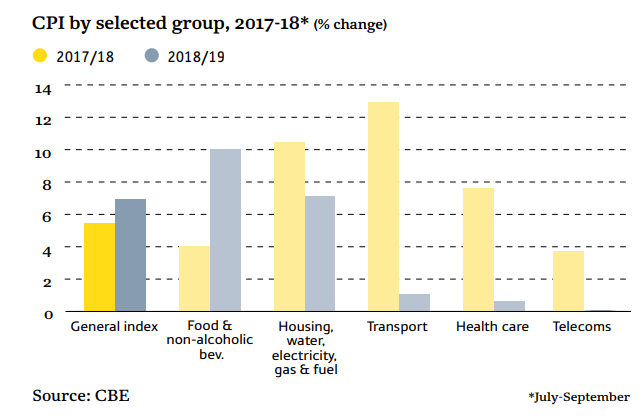 Prior to the novel coronavirus (COVID-19) outbreak, Egypt had one of the best-performing economies in the Middle East and North Africa (MENA) region, according to Oxford Business Group (OBG).

Writing in its recent publication, “The Report: Egypt 2020”, the group added that, despite the disruptive effects of the pandemic on world economies, this trend looks set to continue.

According to the International Monetary Fund (IMF), Egypt is forecast to see real GDP growth of 2% in 2020. This makes it the only economy in the MENA region expected to experience growth that year.

The IMF predicted that the region would see an average GDP contraction of 3.3%. Egypt’s resilient economy can, in part, be attributed to a series of government-implemented structural reforms, backed by a $12bn IMF loan released in five tranches, the last of which was received in July 2019.

“Business leaders are largely confident that a number of sectors stand to benefit from positive fundamental changes brought about by the pandemic. The country’s CEOs have made it clear that the crisis could lead to structural benefits in the long term, such as increasing industrial activity, accelerating digitalisation and making firms more competitive,” the report read.

It added, “Demand for ICT and retail services has soared as the pandemic and resultant measures have accelerated a number of behavioural shifts, ranging from remote working to greater uptake of e-commerce.”

The report also said that, with its strong manufacturing base and strategic geographic location, Egypt has a lot to offer companies looking to diversify production outside of China. In the meantime, the pandemic may result in positive long-term gains for the health sector, as it has highlighted the need for increased spending.

Egypt has among the highest levels of smartphone penetration in Africa, with 45.2m internet users, and some 35 million (or 78% of users) able to access the web through mobile devices.

Moreover, the amount of users is around six times higher in 2020 than it was in 2010. Around 84% of respondents from the retail sector would benefit from some level of digital disruption in response to COVID-19, and almost 50% of total respondents said they were expecting either high or very high benefits from digital disruption in their sector. This is the second-highest proportion in the African countries covered by OBG, exceeded only by Tunisia.

On the business-to-business side, companies operating in Egypt’s well-developed banking and construction sectors are among the region’s most influential firms, and are highly likely to adopt and innovate digital technology. A large amount of financing has been directed towards supporting small and medium-sized enterprises, both before and after the onset of COVID-19.

Macroeconomic data shows that, compared to many other countries in the region, Egypt is well positioned to remain resilient in the face of ongoing challenges. The country’s CEOs have made it clear that the crisis could lead to structural benefits in the long term, such as increasing industrial activity, accelerating digitalisation and making firms more competitive.

Foreign direct investment (FDI) increased by 5% in 2019, rising from $8.1bn to $8.5bn, which made the country the largest recipient of FDI on the African continent.

Egypt Vision 2030 includes a number of concrete macroeconomic goals, including raising the nation’s annual GDP growth rate to 12%, its GDP per capita to $10,000 and its share of global GDP to 1%.

61% of African businesses operating at 60% or less capacity amid COVID-19: OBG