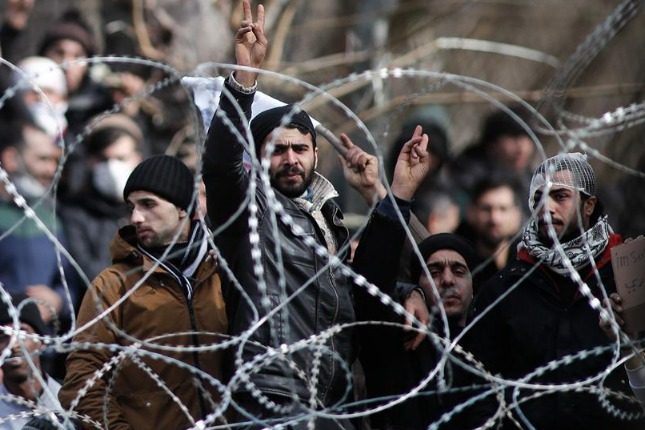 Greece has adopted a tougher stance and is treating the migration challenge as a national security issue, Interior Minister Takis Theodorikakos said on Monday.

The Greek official was referring to thousands of people gathered at the country’s land border with Turkey in the past few days and hundreds still crossing the Aegean Sea on dinghies.

Since Monday morning, for the next 24 hours Greek armed forces are conducting exercises using real ammunition across the land border and north-eastern Aegean, the Greek Defense Ministry announced.

During the weekend, additional police and army units were deployed and Greece formally requested concrete assistance by other EU members to guard Europe’s borders.

European Border and Coast Guard Agency (Frontex) announced on Monday that the executive director of Frontex has agreed to launch a rapid border intervention to assist Greece in dealing with the large numbers of migrants at its external borders, according to an e-mailed press statement.

At least 13,000 people have gathered at Evros land border, according to the International Organization for Migration.

Greece has prevented 24,203 illegal crossings and a total of 183 persons who crossed the border were arrested from the early hours of last Saturday until Monday afternoon, according to government sources.

The numbers included 4,354 persons who were kept off on Monday and 42 detained, mainly originating from Morocco, Pakistan, and Afghanistan, according to the same sources.

Mitsotakis has had a round of telephone calls with many European leaders since Friday to discuss the situation and on Monday he also had a telephone conversation with US President Donald Trump, his office announced.

Earlier, Greek Coast Guard officers retrieved the dead body of a child off the island when one of the boats carrying refugees and migrants from Turkish shores capsized.

A total of 48 persons were on board the boat, according to an e-mailed press statement, while about 1,000 refugees and migrants have landed on the region’s islands since Sunday, Greek national news agency AMNA reported.

Delawar Nazari, 48, from Afghanistan, is one of the new arrivals on the island. He reached Lesvos on a boat with his four children and a grandchild and they have spent two nights out in the open in the cold on a beach with about 200 other people with no means, he told Xinhua on Monday.

His son-in-law was killed by the Taliban and the family left their home to join his brother in Belgium, he said. They stayed 4 months in Turkey and paid €600 ($668) per person to get on the boat and have been risking their lives to reach Greece, he added.

“I want to leave Greece and I want to go to Belgium,” he told Xinhua.

On Sunday, the Greek government announced that no asylum application will be accepted for at least a month by those illegally entering the country.

Nazari and his family will most likely eventually follow thousands of others packed in overflowing reception centres on Lesvos or elsewhere in Greece.

Groups of locals on Lesvos have been blocking small harbours and streets across the island since Sunday, obstructing the disembarkation of new arrivals and their transfer to Moria camp, demanding that thousands of people be transferred to the mainland.

With a population of about 86,000 people, Lesvos currently hosts about 19,400 people at Moria refugee camp, while the centre’s capacity is about 2,800, according to official data.

Out of the about 90,000 stranded in Greece, more than 42,000 refugees and migrants are currently hosted on five islands in north-eastern Aegean, according to data from Greek authorities.

Last week, Turkey decided to open its border gates for illegal migrants after at least 33 Turkish soldiers were killed in an airstrike in Syria’s north-western province of Idlib, the last rebel-held stronghold.

Around 1.5 million Syrian refugees, fleeing from the bombardments of Syrian forces in Idlib, have also flooded Turkey’s border with Syria.

The Turkish government has been repeatedly announcing that it could no longer take the burden of refugees as the country is already hosting over 3.7 million Syrians.