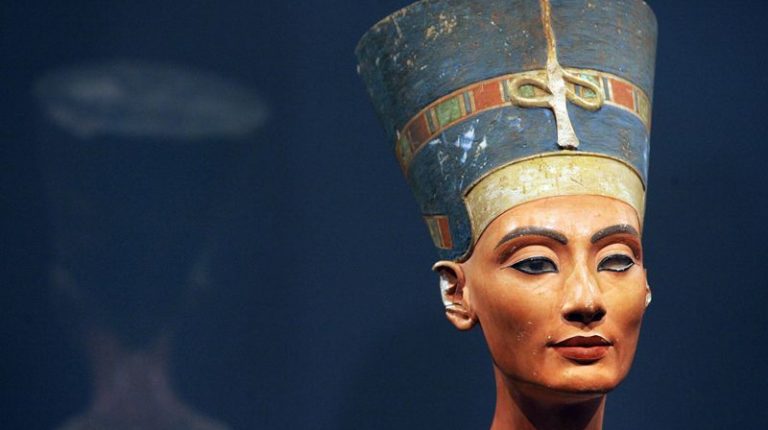 Centuries after her body was buried at what is still a secretive place, the mystery of queen Nefertiti might come to an end, as a recent radar survey discovered evidence that may lead to finding another burial chamber behind the walls of Tutankhamun’s tomb, according to Nature.

The survey, which has been published yet and only Nature has managed to get it, indicates that the young Pharaoh’s burial chamber hides a bigger tomb behind its northern walls that might hide the tomb of his stepmother, Nefertiti.

The research is led by an Egyptian mission headed by former minister of antiquities Mamdouh Eldamaty. Through a ground-penetrating radar (GPR), the mission scanned the area behind the famous Tutankhamun’s chamber in Luxor.

They report, according to Nature, said that they have identified a previously unknown corridor-like space a few metres from the burial chamber. The mission’s results were submitted earlier this month to the Supreme Council of Antiquities, headed by Mostafa Waziri.

Through the x-ray, the mission found a long rock corridor that is parallel in depth to Tutankhamun’s burial chamber. The corridor is located near the east, and appears in the scan to be around 2 metres high and 10 metres long.

The report suspects that it might not be linked to the young king’s tomb, and might be a part of another, undiscovered tomb in the area. However, due to its location perpendicular to Tutankhamun’s tomb, it is believed to be connected as unconnected tombs tend to be aligned at different angles.

Examining the data of the report, Ray Johnson, an Egyptologist at the University of Chicago’s Oriental Institute in Luxor told Nature that it identifies “clearly [that] there is something on the other side of the north wall of the burial chamber.”

The search for the royal queen’s tomb has been high and low for years, with no luck in finding an indicator to where she was buried. Last October, veteran Egyptologist Zahi Hawas revealed that an excavation mission is currently leading the biggest campaign since 1921 when Edward Hawart discovered Tutankhamun’s tomb. He added that the mission has been working in the site since December 2017.

Back in 2015, when Eldamaty was the antiquities minister, the British scientist Nicholas Reeves, a specialist in Egyptian history and material culture, was the first to come out stating his suspicions of having the tomb of Nefertiti hidden behind the wall of the young king.

In a press conference, both announced the results of Reeves’s 18-month research, that came to believe that the iconic tomb of Tutankhamun might house extra rooms. The professor went on to add that his research even supports the possibility that the missing tomb of Queen Nefertiti might be enclosed in one of the extra compartments. However, his suspicions were announced as inaccurate a year later by Hawass, who assured that he came to find nothing in Tutankhamun’s tomb.

Reeves’s findings include the fact that Tutankhamun’s mask was initially made for a queen, as the ears show significant piercing marks, something that was never associated to men in Ancient Egypt.

He further supported his beliefs with evidence. While the tomb’s north wall showed evident cracks that suggest the existence of hidden doorways, the paintings covering that particular wall seems to be drawn later than the others, as it was painted on a white wall then concealed with yellow painting, unlike the other three walls that were initially yellow.

“Plastid-over walls are often found in many tombs, especially in the Valley of the Kings,” Reeves added. “The tomb was made for a queen; yet, the young king’s sudden death changed the tomb’s primary plan.”

Hollywood’s enduring fascination with ‘The Mummy’