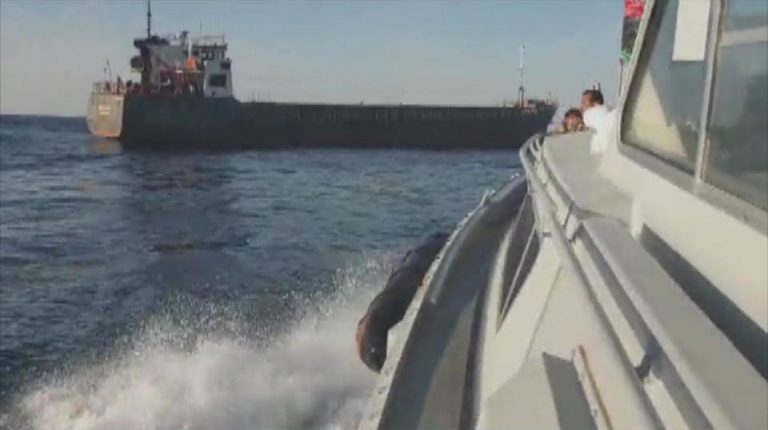 The eastern-based Libyan Arab Armed Forces (LAAF), headed by Khalifa Haftar said on Saturday that they have seized a ship with a Turkish crew on it, as the Turkish parliament ratified the military and security cooperation deal signed with the UN-backed Government of National Accord (GNA) three weeks ago.

The Grenada-flagged ship was stopped by the LAAF in Libyan territorial waters off the eastern city of Derna and was led to the Ras El Hilal port, according to a statement on Facebook.

The LAAF published the identities of three of the Turkish crew members, adding that they are under questioning.

Earlier on Friday, LAAF said they bombed sites used for storing Turkish weapons in Misrata. The deadline which the LAAF gave to Misrata militias to withdraw from the Libyan cities of Tripoli and Sirte ended on Sunday.

The incident came only two days after the GNA decided to activate its memorandum of understandings (MoUs) for military and security cooperation signed with Turkey on 27 November, opening the door for Ankara to send ground troops to Libya in what will be a major escalation.

According to the UN, Ankara has previously provided Chairperson of the Presidential Council of Libya Fayez Al-Sarraj’s government with military equipment, including armoured vehicles and drones.

A senior US State Department official told Reuters on Saturday that Washington is concerned over “the military intensification,” in Libya. “We see the Russians using hybrid warfare, using drones and aircraft. This isn’t good,” the official said.

Haftar forces are allegedly backed by private security forces from the Wagner Group of Russia.

Conflicts has been escalating between the parties and their supporters in Libya in recent days following the GNA-Turkey deals which were also condemned by Egypt, Cyprus, and Greece.

Last week, Haftar ordered to advance toward the centre of Tripoli as part of the “final battle” to control the capital which was launched in April this year.

Turkey to vote on sending troops to Libya on Monday