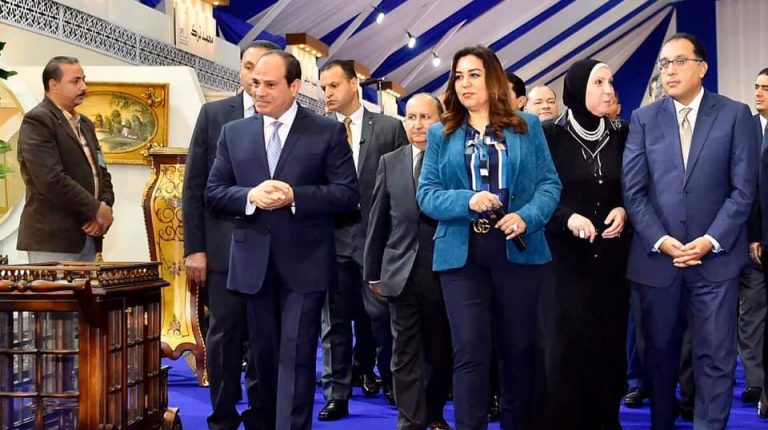 Egypt’s President Abdel Fattah Al-Sisi said on Tuesday that the purpose of the Damietta Furniture City (DFC) is to compete in the global market, not only the local market, adding that there is a high demand on Egyptian furniture products.

Al-Sisi’s remarks came during the inauguration of the DFC in Damietta, and multi-purpose station in Damietta port, as well as other development projects in the governate. Top officials including the Prime Minister, Minister of Military Production, as well as other ministers attended the event.

The president noted that the economic situation was catastrophic, but it improved now amid the state’s great efforts.

Al-Sisi added that the state is taking serious steps to improve the furniture sector and provide youth with job opportunities throughout providing lands, licences, and funds.

On a different note, Al-Sisi revealed that the government doubled electricity production during the last five years and spent EGP 615bn to improve the sector. “The state has spent [this amount] to improve electricity services. I said this because I want people to know we added 28 thousand megawatts in five years. Electricity means life and development.”

To achieve such a goal, the government established a transport network, “I am telling the minister of electricity [attending and addressing attendees at the event] that the deadline for the new networks is in 2019, not 2020,” the president highlighted.

Every project needs great planning, follow-ups, and funding to achieve its goals, Al-Sisi said, urging Egyptians not to allow anyone to make them question the costs or the government’s achievements.

On the other hand, Al-Sisi said that the cost of the informal sector’s rehabilitation, and its electricity repairment, places a heavier cost on the state, adding that the government spent EGP1.3 bn to solve this issue and there is also a need to EGP1.7bn.

Al-Sisi added that there is also a need to improve the conditions of slums regarding the rehabilitation of water and sewage networks.

“The most dangerous challenge that faces Egypt is not from the outside, but from the inside,” Al-Sisi said, calling citizens to respect the government’s efforts and plans and stop unauthorized construction.

Al-Sisi said that when people turn to the streets (protest), they destroy their country. The government is paying massive efforts to solve the country’s issues and to convince Egyptians that their state is doing its best to tackle their problems, Al-Sisi added.

Al-Sisi affirmed that he will repeat these calls until people are convinced to not follow the wave of protests in nearby countries to avoid demolishing their country.

Earlier on March, the DFC’s CEO El Moataz Bahaa El-Din told Daily News Egypt that the company will complete and operate its furniture manufacturing complex by 2022.

The DFC is a 331-feddan industrial zone is being established according to cabinet decree No. 999 of 2015 to establish wide furniture manufacturing sites.