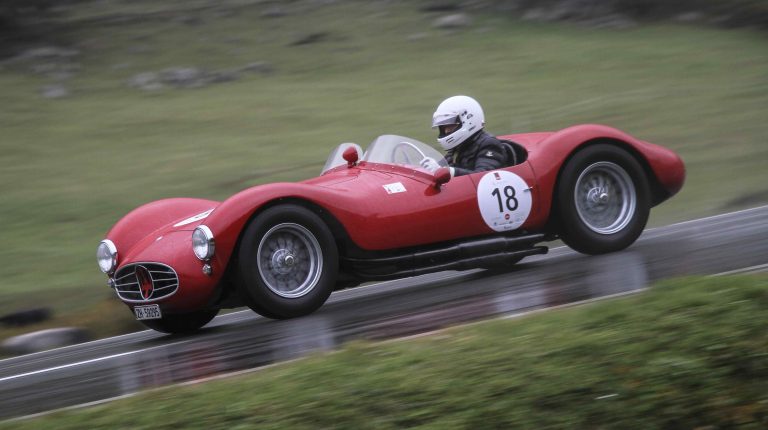 Not your regular race or hill-climb by any means. This highly selective, hair-raising Gran Turismo (GT) event takes place in South East Switzerland, at the Bernina Pass to be exact. This year, the GT celebrates the 90th anniversary of this highly regarded motorsport event dating back to the 1920s.

The first two races were held in 1929 and 1930, the race was about 16km long rising steadily from 1100mto 2500m above sea level. It wasn’t tarmac yet, back then it was a dirt track. The first race in 1929 was won by the German driver Hans Stuck in his Austro-Daimler. The 2019 Bernina GT made history, as the original winning Austro-Daimler was driven by Hans-Joachim Stuck, Hans Stuck’s son! The son is a former 24h of Le Mans winner (1986 and 1987) and former Formula 1 driver. He also won the 1990 German Touring Car championship (DTM).

The recent editions of the BerninaGT is a course of 5.7km on very good Swiss asphalt/tarmac road, beginning at La Rosa and ending at Ospizio Bernina. Elevation at the start line is 1880 meters, and cars have to tackle 52 curves and bends before reaching the finish line at 2328 m above sea level. Cars are literally racing in the clouds at these heights.

To complete the list of the fascinatingcars, the vehicles also included Jaguar D-Type, an early (narrow body) AC Cobra 289, a more recent brushed aluminium AC Cobra, one of the last few by automotive designer Caroll Shelby, Audi Quattro Group B Rally Car, 1965 Serenissima 308V Jet Competizione which did not race after finding out that another Original Scuderia Serenissima car was competing, the 250GT Bread-van,a couple of Jaguar XK120, a couple of Mercedes 190 SL, and a Group B Lancia Stratos.

There were also modern but very uniqueexotic and super-sports Cars participating such asa very late edition Lamborghini Countach, the new (1500 HP) Bugatti Chiron, and aPrototypeBMW 535i Station Wagon Alpina B7.

At Bernina, in the heart of the Alps Mountains, the setting and location is like no other. The temperature can change and weather can flip in seconds. The start line is already foggy, and the race track takes all cars through the clouds and above to where the sunlight is shining… it’s a magical unforgettable experience.

Just imagine for a moment, the well maintained Swiss roads, climbing the Alps to temperaturesjust above zero,while twisting and turning in all directions. There are quite a few hair-pins (sharp bends) making this another joy, to again go through all the gears of your well-tuned machine and listen to the echoes and bellows, whines and growls as you climb up to Bernina. Each unique car and engine, is an orchestra appreciated by only the real auto-aficionados a through the picturesque valleysand mountains of south east Switzerland.

Very few races witness cars leaving a museum to join the action of fuel burning, rubber squealing,  and then go back to the museum walls. We can only confess that the Bernina GT is truly today’s ultimate historic race.

The recipe in making this very tricky and logistically challenging “BGT” race can be told by the few men and women behind the scenes. As the organizers have plenty to worry about, we had to make sure we cover the action in the best way possible.

The location with its charming beautiful country side greenery, laid back farms, and mountains hugging you as you venture deeper into the valleys. The lush green surrounding one is soothing and pleasant, yet the sharp edged rocks and cliff faces stand as a serious reminder of hazards just off the tarmac. As you are literally race in the mountains at elevations of 1,800 to 2,500 metres above sea level, the weather can change rapidly. Add a splash of unexpected weather and you are faced with racing conditions, that are tough yet, permissible. The racing marshals are always busy with their flags, as there were just a couple of breakdowns but a few over-takes. Cars start with a two-minute interval but some faster cars close the gap ahead sooner than one expects.  Witnessing all the cars with their chassis flexing as they manoeuvre their way around the twisty hill climb is not something you see regularly, not even in most other historic races.

The legendary (Love me/Hate me) 1962 Ferrari 250 GT SWB “Breadvan” was a feat for the eyes, not mention the beautiful V12 Snarl in high revs. Only one was created and yet after years of compiling history, competing the 1962 24h Le Mans and winning both Guards Trophy and Ollon-Villars Hill climb also in 1962. Many years and races later, this very Ferrari competed and raced at Bernina GT in the sun, rain, fog, and spread joyful emotions among so many attendees of the 2019 BGT. Cars were made to be driven.

With regards to the Ferrari Breadvan, the car is originally chassis# 2819 GT, a 1961 250GT SWB which underwent a body change to improve aerodynamics and to compete with the then new 250 GTO’s in 1962. Owner of the car back then Count Giovanni Volpi and owner of Serenissima Scuderia (Racing Team) hired Engineer Giotto Bizzarini to upgrade his Ferrari. The Breadvan Ferrari first appeared at the 1962. It quickly passed all Ferrari GTO models and was the seventh overall during the fourth hour when a driveshaft failure caused its retirement. Results at other races proved the design’s effectiveness, as the car won the GT class in two races during the 1962 season.

There are always race results, but at the Bernina GT, it’s an achievement for each participant and car to have conquered the mountain. Time doesn’t make a difference, it’s the joy of driving ones car, feeling every vibration, attentive to the faintest new sounds, sweating a bit and always gripping the steering wheel with your eyes focused on the near and far horizons…Bernina GT, I will be back…