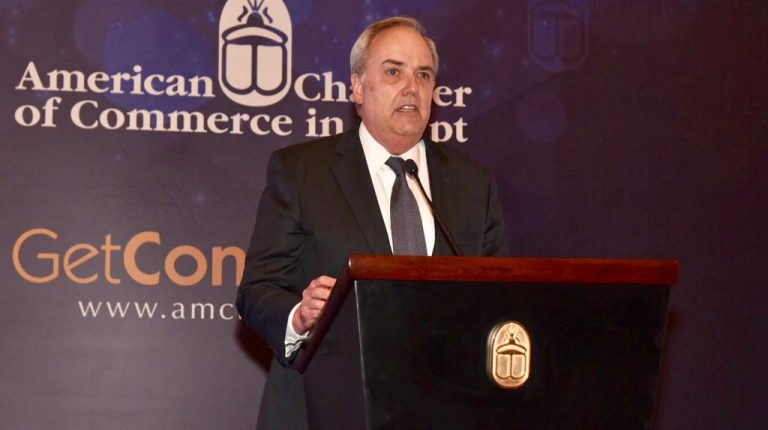 Trade statistics show a 50% increase in bilateral trade between Egypt and the United States in just two years supported by the strong performance of the American and Egyptian economies, US Charge d’Affaires, Thomas Goldberger, said at the general meeting and Iftar of the American Chamber of Commerce in Egypt (AmCham Egypt) held on Tuesday.

The fundamental changes in economic policy and currency determined by market forces made Egypt a much more attractive and predictable place than it had been for American companies to do business and invest in, he stressed.

The US embassy has devoted every effort toward rebuilding and reaffirming the historic and strategic partnership between the US and Egypt, he noted, adding that the AmCham is Egypt’s premier private sector organisation, and that its members are friends and advocates for a relationship that has brought so many benefits to both countries.

“The embassy and the AmCham have been close partners and I look forward to continuing and deepening our cooperation with the new board under Sherif Kamel’s leadership. Our friend Tarek Tawfik and the outgoing board deserve our highest praise and appreciation for all of the work we have done together,” he further said.

American companies in Egypt provide much more than financial investment and jobs to individual Egyptians, he added, noting that companies inculcate the American way of doing business, educate and improve their employees through new challenges and experiences, support their local communities, and maintain the highest personnel, environmental, and safety standards.

The number of Egyptians in leadership positions in major American corporations shows the way American companies treat their Egyptian employees and the skill and potential of Egyptians, he affirmed.

“A number of Egyptian companies have invested in the US and we look forward to more,” he stated, adding that a strong Egyptian corporate delegation is attending the SelectUSA Summit in Washington in June, joining 3,000 other companies to learn about investment opportunities in the US and federal, state, and local programmes which support foreign investors.

Reforms of the educational system are generating a lot of interest from US institutions of higher education in coming to Egypt and in creating branch campuses, he asserted, noting that infrastructure and energy investment offer unprecedented opportunities for American firms to contribute to Egypt’s prosperity.

“We often refer to the security partnership or to economic cooperation as the relationship’s backbone, but our philosophy has been deeper. Confidence and trust at the level of the public and individual human beings is the soul of the relationship and without strong personal bonds we could not accomplish anything else of importance,” he mentioned.

According to the latest statistics, the number of Americans coming here for tourism is approaching or reaching the high point of a decade ago, he affirmed.

Over the Fulbright Programme, over 7,000 Egyptians and Americans have been educated for 70 years, he asserted, noting that relations are stronger than ever.

This school year, over 100 Egyptians are studying or teaching in the United States, and American Fulbright scholars and students are coming back to Egypt, he said.

One pillar of the people to people ties that shows their strength and longevity is the American University in Cairo, which is celebrating its 100th anniversary this year, he added.

Hisham Famy, CEO of the AmCham Egypt, said he will continue to communicate with the members of the US commerce community to promote Egypt’s private sector and to tell about the successful economic reform programme.

Seven Egyptian entrepreneurs to participate in GES: US embassy