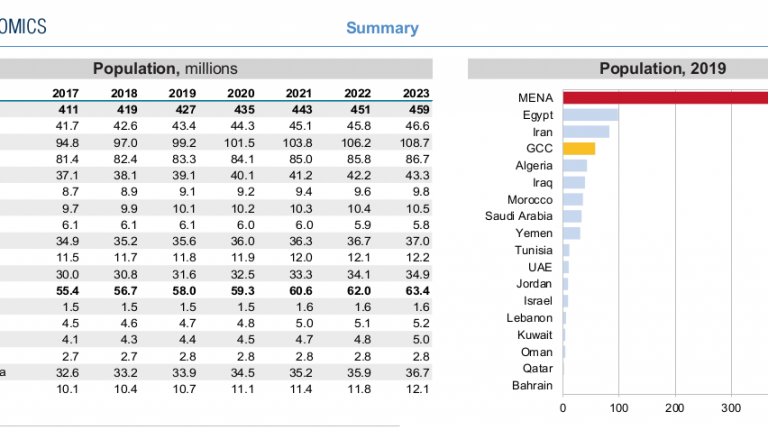 “Egypt’s economy will likely grow at a strong rate this fiscal year due to higher government spending, rising natural gas production, an improved regulatory environment, and a pick-up in inbound tourism. However, the still-fragile government finances and an uncertain global trade environment will limit growth potential,” according to Focus Economics’ report.

The report stated that the inflation decelerated to 14.2% in March down from 14.4% in February but remained outside of the Central Bank of Egypt’s (CBE) fourth quarter (Q4) of calendar year (CY) 2020’s target range of 9.0% plus or minus three percentage points.

The report explained that March’s slowdown was due to a weaker increase in prices for food, excluding fruits and vegetables.

“Going forward, inflation should tick down as the effect of recent cuts to public subsidies fades. Our panellists expect inflation to average 12.2% in CY 2019, which is up 0.2 percentage points from last month’s forecast, and 10.3% in CY 2020,” the report added.

At its last monetary policy meeting on 28 March, the CBE left all interest rates unchanged. The March decision came supported by an uptick in inflation in February and possible sustained price pressures in the run-up to Ramadan in May.

Furthermore, the CBE has allowed the value of the pound to be determined by market forces since November 2016, as authorities continue to ensure stability in the exchange rate against the USD. On 3 May, the pound traded at EGP 17.18 per $, a 0.9% appreciation from the same day a month earlier.

The Egyptian pound is seen weakening going forward on the back of expected monetary policy loosening, with our panel projecting it to ending CY 2019 at EGP 18.01 per $ and CY 2020 at EGP 18.55 per $.

The report mentioned that the Emirates NBD Egypt Purchasing Managers’ Index (PMI), which measures business activity in the non-oil private sector, rose to 50.8 in April from 49.9 in March, coming above the 50-threshold which separates expansion from contraction for the first time in eight months.

Concerning the Middle East, the report stated that although economic activity in Middle East and North Africa will gain steam this year, growth will be nowhere near the high rates logged in the aftermath of the global financial crisis. An uncertain global economic outlook, oil production cuts in compliance with the OPEC+ deal, and geopolitical risks will continue to cap regional growth.

Chance exists to reduce interest by 1% in May after inflation ease in April: Beltone