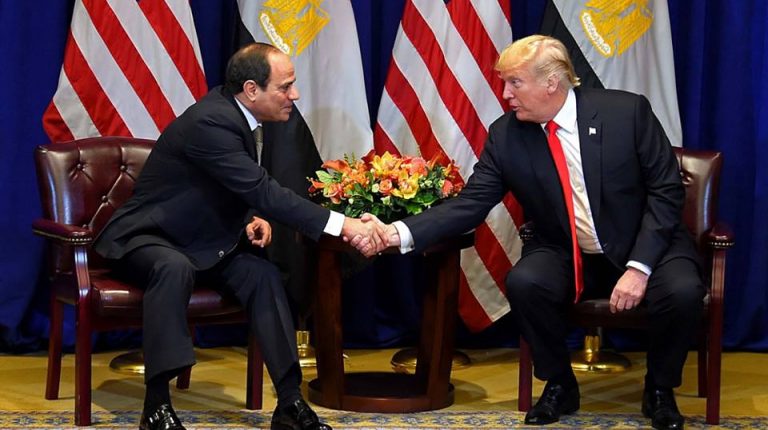 Egyptian President Abdel Fattah Al-Sisi to meet his US counterpart Donald Trump on Tuesday in Washington where they will discuss bilateral relations and the latest developments in the Middle East.

Al-Sisi’s visit came upon Trump’s invitation, marking the second visit since he assumed office in 2014, and his sixth meeting with the US president.

The leaders are expected to discuss the Palestinian cause and the situation in Syria, Libya, and Yemen, as well counter-terrorism efforts.

The visit also aims to strengthen the US investments flows to Egypt, as well as the improvement of trade exchange between the two countries.

Last week, the White House announced that Trump will receive the Egyptian president for strengthening their mutual partnership and bolstering military and counter-terrorism cooperation.

Al-Sisi has also been to New York for five times, to attend the UN General Assembly (UNGA) meetings.

On Sunday, Al-Sisi held an African tour, starting with Guinea, where he met with the Guinean President Alpha Condé in Conakry. The tour also included Cote d’Ivoire and Senegal. It aimed to address regional issues of common interest as well as enhancing economic integration.

Al-Sisi and Condé tackled a number of African issues and possible solutions, in the light of Egypt’s current presidency of the African Union. They also discussed boosting bilateral relations through creating a joint committee between the two countries and activating bilateral cooperation.