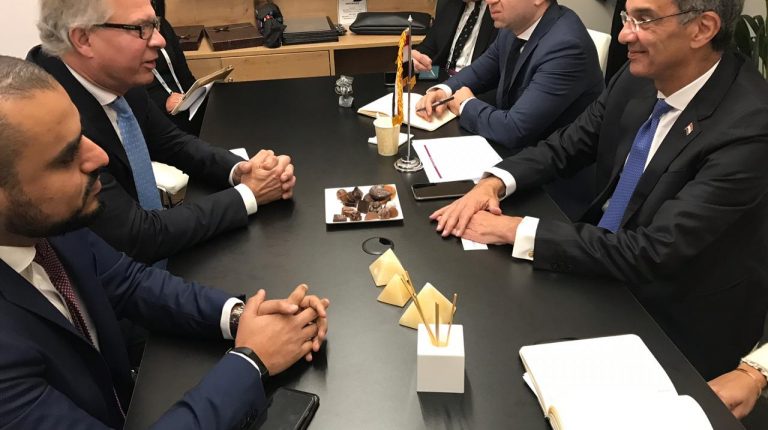 Within the framework of his participation in the events of the Mobile World Congress (MWC), Amr Talaat, the minister of communications and information technology (MCIT), met with Francisco Polo, Spain’s Secretary of State for Digital Advancement. During the meeting, the methods of cooperation between the two countries were discussed in the field of IT and communications, especially in the field of smart cities, the internet of things (IoT), artificial intelligence (AI), and establishing excellence centre in the field of IT to make Egypt a passage for Spanish technology in Africa.

At the end of the meeting, Talaat invited the Spanish Minster to participate in World Radio Communications Conference, which is expected to be hosted in Egypt in October in Sharm El Sheikh.

Amr Talaat also met with Joachim Kunkel, who serves as the general manager of the Solutions Group at Synopsys. The meeting included discussing increasing the company’s investments in Egypt and establishing a training academy, as it was agreed to train 1,000 university graduates in the field of designing e-circuits within two years.

Noteworthy, Synopsys has been working in Egypt through its partner ‘Silicon Vision’, which is specialised in the field of wireless and electronic circuits design.

Talaat has also held a meeting with Lino Cattaruzzi, the managing director of Google for the Middle East and North Africa region. The meeting discussed the ways to cooperate with Google and review the future investment plans in Egypt and Africa.

The meeting discussed the cooperation with the company to establish a Google campus in Cairo, which would provide training courses and incubators for emerging technology companies. Google International operates similar headquarters in other capitals in a number of countries, including London, Madrid, and Berlin. The possibility of expanding the company’s global business in Egypt through the establishment of a technology centre in Egypt ‘Google Park’ was also discussed.

The meeting has also discussed the ways to enhance cooperation in the field of AI through establishing a research centre for Google International in Egypt, similar to the centre in Ghana, which is managed by Google International and includes senior researchers and engineers in the field of AI and its applications to provide innovative solutions for the challenges facing society, especially in the areas of health and education.

Moreover, Talaat also met with the CEO of Vodafone Group, Nick Read. The meeting reviewed the company’s future plans to provide internet services and cooperation in the field of electronic payments in order to contribute to the implementation of the state’s plans to reach a non-monetary society and enhance financial inclusion.

ICT’s contribution to GDP to reach 5% in three years: MCIT

Without 4G, it was not possible to conduct current mobile broadband: Etisalat Misr

Middle East aspires to be at forefront of 5G, not left behind: Johansson