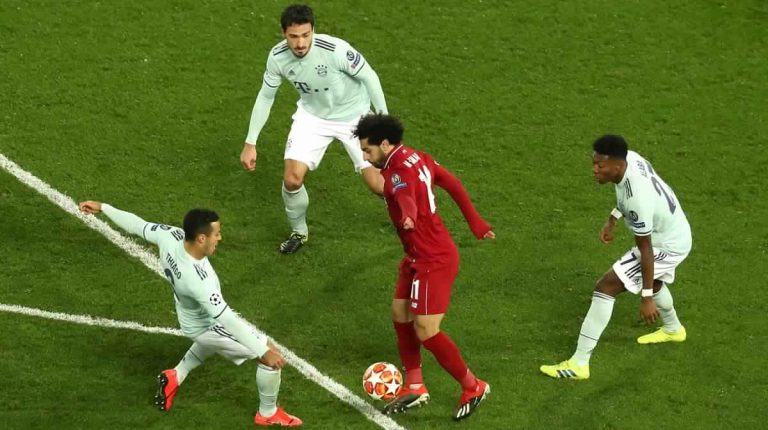 The UEFA Champions League witnessed two goalless draws on Tuesday in the first leg of last 16 round matches, just for second time in its history.

According to UEFA, “this is only the second time in round of 16 history there have been two goalless draws on the same night.”

Liverpool star Mohamed Salah participated in the match and had many chances to score a goal, however, he and his peers were not lucky.

The first chance for Liverpool was at the 12th minute after Salah received a superb pass in the box. He almost scored a goal, but goalkeeper Manuel Neuer denied the strike. At the 33rd minute, Senegalese Sadio Mane wasted a good chance for Liverpool after Naby Keita passed the ball to Mane who shot the ball out of target.

Liverpool reached the round of 16 after coming second in Group C with nine points after Paris Saint Germain, while Bayern Munich topped Group E with 14 points.

Liverpool has managed to maintain its second longest run with no defeats for 20 matches on Anfield.

Barcelona qualified for the round of 16 after they topped Group B with 14 points, beating English Tottenham Hotspur, Italian Inter Milan, and Dutch PSV Eindhoven.

Despite the absence of goals, the two matches have seen many distinguished records.

Lyon have drawn each of their last six Champions League games, equalling the record for most consecutive draws in a single Champions League season along with AEK Athens (2002/03) and Rangers (2005/06).

Bayern Munich failed to score in a Champions League playoff for the first time since May 2015 (against Barcelona).

Barcelona are winless in their last six Champions League away knockout games (D2 L4), failing to score in five of those.