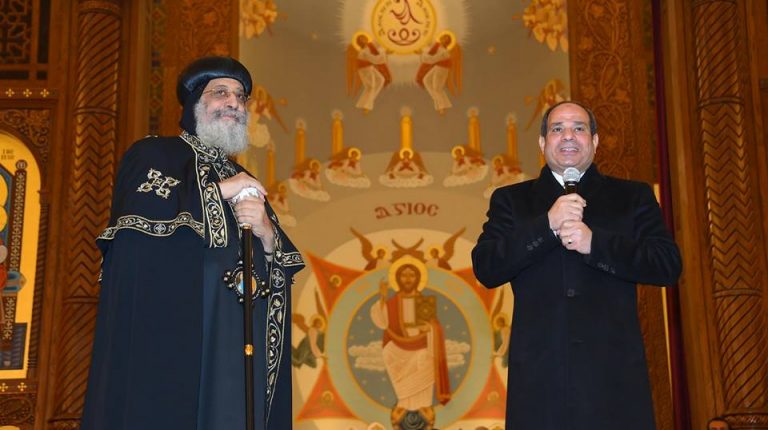 President Abdel Fattah Al-Sisi inaugurated the Al-Fattah Al-Aleem Mosque and the Cathedral of the Nativity of Christ on Coptic Christmas Eve on Sunday night in Egypt’s New Administrative Capital, which lies 45km east of Cairo.

The cathedral is the largest in Egypt, and it belongs to the Coptic Orthodox Church, which is the grandest church for Egyptian Christians, who account for 10% of the population, according to statistics of the Central Agency for Public Mobilisation and Statistics (CAPMAS).

The new cathedral is also believed to be the greatest of its kind in the Middle East. President of the Palestinian Authority Mahmoud Abbas, and the Secretary-General of the Arab League Ahmed Aboul-Gheit presented during the inauguration.

In his speech in the new cathedral, Al-Sisi paid special homage the souls of the Egyptian martyrs from the security personnel as well as the civilians, saying that “we are in a very important moment of our history.” He reminded the attendees of his promise two years ago in Al-Abbassia Cathedral about celebrating at the new cathedral in just two years, which became a reality on Sunday night.

“We will never allow anyone to tarnish our unity. I do not like the concept of sectarian strife because we are one and will remain one,” said Al-Sisi. He also reiterated Pope Tawadros II’s phrase that “a homeland without churches is better than churches without a homeland.”

Tawadros II, Pope of Alexandria and Patriarch of the See of St Mark, said in his speech that Al-Sisi has kept his promise, and thanked him and the armed forces for finalising the constructions of the building on time.

US President Donald Trump praised the inauguration of the new cathedral, and tweeted “Excited to see our friends in Egypt opening the biggest Cathedral in the Middle East. President El-Sisi is moving his country to a more inclusive future!”

During his speech at the inauguration of the cathedral, the Grand Imam of Al-Azhar, Sheikh Ahmed Al-Tayeb described the occasion of inaugurating a mosque and cathedral simultaneously as an exceptional event in both the history of Christianity and Islam.

“As I know, this is the first time for a mosque and church to be built and inaugurated together, and this represents the feelings of brotherhood and exchanged goodwill between Muslims and their Christian brothers,” Al-Tayeb said. He consequently thanked President Al-Sisi for the “wonderful achievement”.

The Grand Imam congratulated Pope Tawadros II and Egyptian Christians for the new substantial cathedral which he said will stand together with the mosque to counter any attempt to destabilise the nation or spread sectarian strife.

Explaining Islam’s positions regarding churches, Al-Tayeb said that “Islam is committed to protect churches in accordance with the Islamic Law, as Islam orders Muslims to protect both mosques as well as churches.” He further added that Islam assigns Muslims to defend and protect Christian and Jewish holy places and places of worship, according to the Holy Quran.

In conclusion, Al-Tayeb warned of recalling old fashioned religious edicts which were stated during specific circumstances to prove that establishing churches is banned in Islam.

“Most of Egypt’s churches were built under the role of Muslim states,” the Grand Imam confirmed.

Sectarian-related crimes to be addressed in State Security Emergency Courts