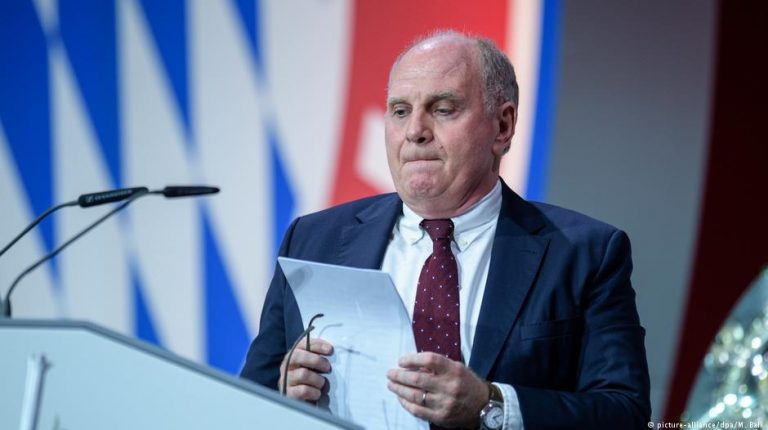 Uli Hoeness looks set to remain a leading figure at Bayern Munich for years to come, but does that make sense? Germany’s most successful club deserves better, writes DW’s Jonathan Harding.Despite being faced with boos and jeers at the club's recent AGM as some Bayern Munich members voiced their disapproval of his very public feud with former friend and Bayern legend Paul Breitner, the club's sponsorship deals with Qatar, its criticism of the media and Uli Hoeness' personal tirades against former players and coaches, the club president was unanimously voted onto the advisory board.

Quite frankly, this is an outrage. This is a man who, in an extraordinary press conference earlier this season, essentially said that criticism wasn't allowed and called for more respect. A man who has no problem signing commercial deals with countries in which the state of human rights is a serious concern and there is a desperate need for labor reform. And a man whose return to office after serving half of a 42-month prison sentence for tax evasion from June 2014 until February 2016 was hailed as triumphant. It has been a flurry of actions not in line with the values of a mature individual – let alone those of an exemplary football club.

By all means call out people for publishing factual inaccuracies, but don't try and shut down the space for criticism in a democratic society, and especially don't embarrass yourself by calling for more respect and then delivering juvenile insults towards a former and current player.

Expect a level of respect given your experience and expertise, but then be sure to return such values and don't consider yourself above the law. Clearly, the commercial development of the club cannot be ignored, but at least consider the real price of any business deal before entering into it. Refusal to accept or adapt leaves Hoeness looking out of touch with reality and falling short of the values of the club.

Perhaps that October press conference was a shrewd tactical move by Hoeness and Bayern CEO Karl-Heinz Rummenigge designed to take some of the heat off then under-fire head coach Niko Kovac. But if so, it has come at far too great a price. Hoeness' great work of the past four decades to make this club a powerhouse is now being tarnished by his own actions.

Last month's AGM left Hoeness looking shocked and emotional – perhaps he'd been spooked by the level of clear, vocal criticism. After it was all over, the 66-year-old said that he hoped things would change because if not, it would not be his Bayern Munich any more.

Fortunately, Bayern Munich never has been his club – at least not his exclusively. And remarkable as it may seem to suggest, after the events of 2018 it seems almost obvious to do so: Uli Hoeness is no longer the right man for Bayern Munich.