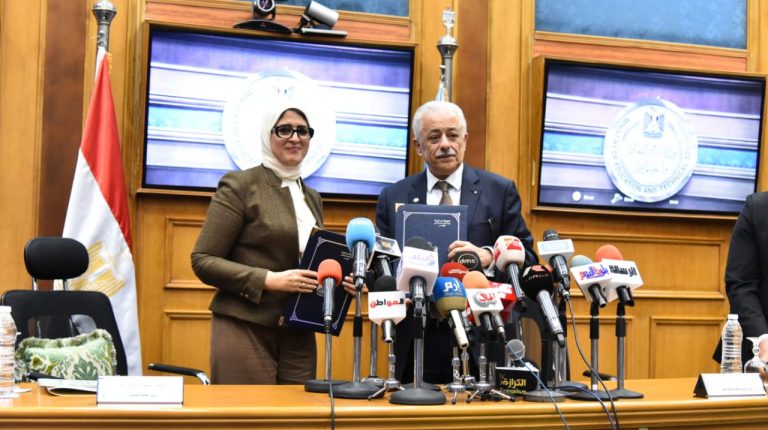 The Minister of Health Hala Zayed and the Minister of Education Tarek Shawky launched a campaign on Sunday for the early detection of anaemia, stunting, and obesity among students of the primary schools, across the country’s governorates.

The campaign which will last until 20 December, providing students with free medication.

In a press conference, Zayed said that the campaign is considered a partial survey for students, as it aims to scan 1,500 pupils in each governorate from three different schools, and from diverse social classes.

The minister of health added that the ministry formed a team consisting of one doctor, three medical visitors or nurses, a lab technician, and a data entry specialist at schools. The ministry also provided the selected schools with medical tools for measuring haemoglobin. She pointed out to a meeting held earlier, stating that the campaign will include specialists in endocrine and paediatrics to put a system for electronic registration, in accordance with the standards of the World Health Organisation.

Zayed further explained that the results of the survey will help the state reconsider the nutrition systems at schools, in order to help students become healthier in their early ages. She praised the role of the ministry of education in President Abdel Fattah Al-Fattah Al-Sisi’s initiative for hepatitis C, and communicable and non-communicable diseases, under the slogan ‘100 million Health’.

During the press conference, the two ministers also signed a memorandum of understanding between the ministry of health, and the Knowledge Bank to help in spreading information about medical trainings.

‘Egypt Can with Education’ kicks off in Hurghada

Al-Sisi calls on media to focus on challenges facing Egypt