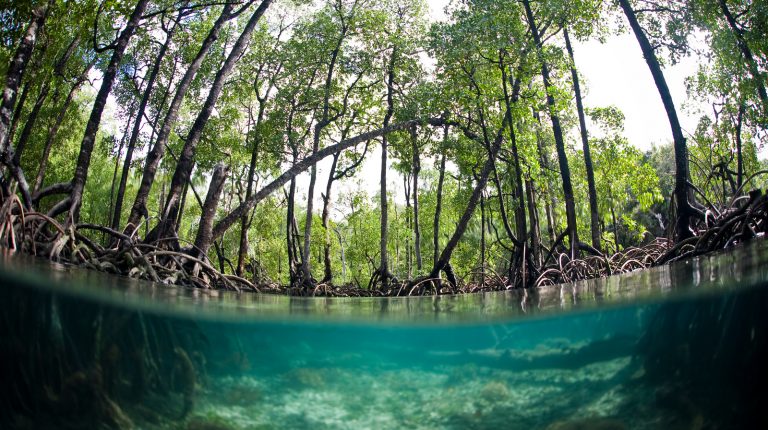 As climate change has become the major danger currently threatening our planet, the scientific community is exerting remarkable efforts towards reaching solutions or means for mitigation. One of the latest efforts came from Singapore, where a team of geographers suggested that coastal vegetation such as mangroves, seagrasses, and salt marshes may be the most effective habitats to mitigate carbon emissions.

Seagrasses live in the coastal waters of most of the worlds’ continents. Prior research stressed that dikes that are used in protecting coasts could be lower if they are protected against the waves by grassy marshes.

Geographers from the National University of Singapore (NUS) have found that countries which have large coastlines could expand these ecosystems to further decrease the impact of their fossil fuel emissions. Their findings were published recently in the Royal Society journal Biology Letters.

Egypt is one of the most affected countries by climate change, as well as the Arab region in North Africa and the Levant. Those countries, particularly Egypt, could face the danger of vast submerged areas of cultivated and urban lands, in addition to the perils of CO2 emissions.

While previous carbon storage studies have largely focused on terrestrial environments such as forests, another recent paper revealed that marshes and mangroves can store carbon an estimated 40 times faster than forests.

The study explained that over the past century, the world lost from 25 to 50% of its blue carbon habitats, with an additional 8,000 skm disappearing annually.

The research comes to meet the requirements of the recent Paris Climate Change Agreement which sat a target for all countries to become carbon neutral in the future, and utilising these natural ecosystems could help achieve this goal. According to the Agreement, each nation committed to limiting global temperature rise to 2 C degrees, and to work towards the safer target of 1.5 C degrees.

Researchers define the ecosystem of coastal vegetation as a ‘blue carbon’ ecosystem. This unique ecosystem has several advantages which makes it one of the good mitigation methods. The current study could influence how every country can support its commitment of the Paris Agreement, which states that countries must remove as much carbon as they emit by 2100. The authors of the study believe that expanding blue carbon ecosystems could make this goal more achievable.

According to the study, the blue carbon can not only grow fast, but also accumulate organic carbon in the water-saturated soil that surrounds it. Thus, blue carbon vegetation such as mangroves are able to store carbon more efficiently, in a way that other ecosystems such as tropical rainforests are not able to.

Globally, the limited range of coastal regions caused a limited impact to the blue carbon ecosystem. Researchers say that just 0.42% of the global human-induced carbon emissions in 2014 were mitigated by these ecosystems. However, for countries with extensive coastlines, moderate carbon emissions, and limited deforestation, these habitats could be effective at counteracting some of the fossil fuel emissions caused by human activities, according to the study.

Findings of the paper revealed that the conservation and restoration of blue carbon ecosystems are a direct way to mitigate the effects of climate change, in addition to all the other benefits that these ecosystems provide to people. After the revelation that mangroves and other blue carbon ecosystems are such efficient collectors of carbon, the researchers of the study were motivated to push for the protection of that ecosystem.

The research illustrated that Nigeria, Colombia, and Bangladesh, are among the top 50 fossil-fuel emitting countries in the world, however, mangroves alone mitigated over 1% of their national carbon emissions in 2014.

“In 2014, Colombia had a mangrove surface cover of around 1,700 skm and generated carbon emissions of 23m tonnes every year. Our study suggests that mangroves mitigated almost 260,000 tonnes of these emissions annually. If national carbon emissions were to be reduced and mangroves protected and restored, this percentage would become even greater,” said Pierre Taillardat, the first author of the study who conducted the research while at the NUS Department of Geography, and in conjunction with the NUS Tropical Marine Science Institute.

According to the press release of the NUS, Taillardat explained “We thought that this approach would be interesting for countries like Indonesia and Malaysia, due to their extensive coastlines occupied by mangroves. However, the high rate of mangrove deforestation in both countries is actually reducing the importance of this natural carbon sequestration process.”

Taillardat added that “considering the high competition between land-uses and the lag time before economies become fossil fuel-independent, conservation and expansion of ecosystems with high carbon sequestration potential is one low-cost option which can contribute to this Paris Agreement commitment.”

If mangrove deforestation was stopped, they could potentially mitigate around 1.6 % of the natural carbon emissions of Malaysia, while in Indonesia, it would be even more impactful, mitigating approximately 2.6 % of manmade carbon emissions,” said assistant Professor Massimo Lupascu from the NUS Department of Geography, and one of the co-authors of the study.

The paper points out that the cultivation of mangrove trees is not difficult and it takes only a few years to begin growing a forest of new trees by creating conditions that are similar to those found in a natural forest.

Atef Moatamed: a geographer with a sense of adventurer

Plastic waste and the recycling myth

What will it take to clear the air in Berlin?