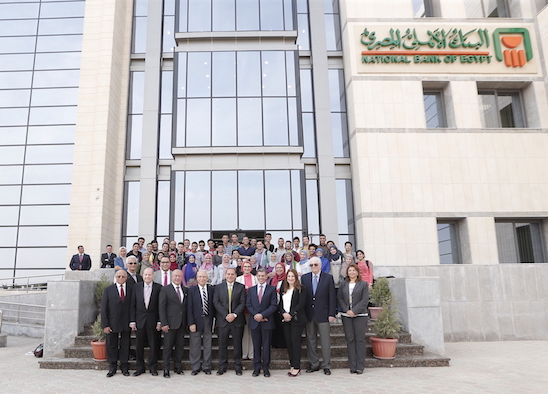 According to Okasha, the bank’s funds for the construction of this building is a extension of its support to Zewail City, which amounted to EGP 300m for this megaproject. The state adopted this endeavour as a national project for the scientific renaissance and research in Egypt, confirming the bank’s conviction in the importance of scientific research as one of the main pillars of progress.

The completion of the Institute’s new building will contribute towards developing generations of researchers and scientists with a capacity to expand technology for the manufacturing of high-precision devices in the areas of health, science and energy, the NBE’s chairperson noted.

According to Okasha, the NBE has provided 119 scholarships in Zewail City worth EGP 10m. These grants targeted talented students who are unable to afford tuition fees in the City from 20 governorates, of whom 40% were females and 60% were males.

The bank also aims to help Zewail City perform its mission, which will positively reflect the development process of education and scientific research in Egypt, which is mirorred in turn by increased national production levels, indicated Okasha.

The NBE is pursuing a carefully planned strategy to support the educational process in Egypt on all counts, which includes not just developing buildings, facilities and providing school equipment, but also includes consideration towards evolving the human condition, which is the cornerstone of that strategy and is in line with Egypt 2030 Vision and the sustainable development goals, Okasha stressed.

For his part, Sedky said that the NBE Institute building for nanoscience is the largest project to support scientific and technological research in Egypt, and the largest nanotechnology Institute in the region, wherein the Institute contributes towards establishing a knowledge pyramid to supply local industries, achieve significant economic returns from intellectual property gains, and improve medical services provided to citizens.

The inauguration ceremony was attended by Yehya Aboul Fotouh and Dalia Al-Baz, NBE vice chairpersons; Ali Al-Saidi and Adel Hosny, representatives of the current and former NBE board of directors; Nermin Shahabuddin, head of Strategic Marketing and Sustainability at the NBE, Zewail City officials and students who won the NBE’s scholarships.