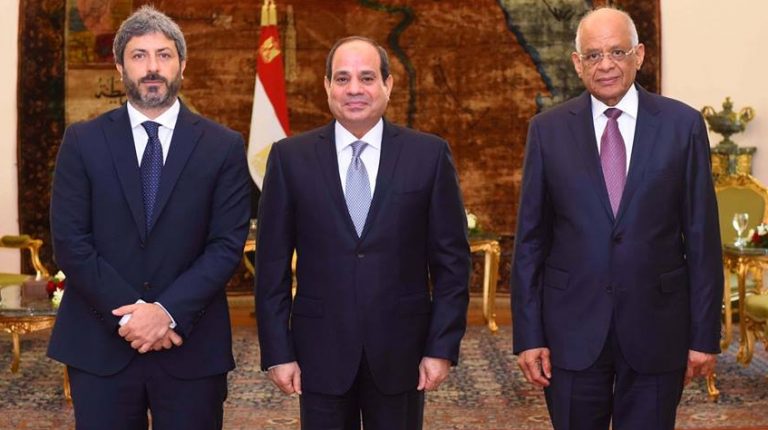 President Abdel Fattah Al-Sisi met on Monday Italy’s Chamber of Deputies Speaker Roberto Fico, where they discussed the latest developments in the case of the Cambridge student Giulio Regeni who was killed in 2016.

Al-Sisi asserted Egypt’s drive to reveal the truth and vowed to maintain full transparency when it comes to the investigations that are undergoing concerning the murder case. The president also promised that Egyptian prosecution will take all measures to facilitate the investigations and to enhance the cooperation with the Italian side.

According to a statement by the presidency, Fico praised Egypt’s efforts so far in the case, and mentioned that capturing the real perpetrators in the case will have a positive impact on the Italian public.

Both countries have for long been coordinating in investigating the case, whereby the latest updates were in June, when the office of Egypt’s prosecutor general said in a joint statement with its Italian counterpart that the examination from the recordings of the Cairo metro stations, since part of the investigation into the murder of the Italian student Regini, showed “several gaps” in the recorded content, which are missing images and videos which have not been retrieved yet.

Regeni, 28, was found dead in a ditch along the Cairo-Alexandria desert road on 3 February, nine days after his disappearance.

Monday’s meeting also discussed one of the most heated topics in Europe which is migration. Egypt has been a considerable partner with several European countries in combating illegal immigration. The meeting also went on to discuss the legal, security, and economic ways to combat the issue.

During his visit last month, Milanesi praised Egypt’s efforts in confronting illegal immigration, and its “excellent cooperation” regarding investigations into Cambridge student Giulio Regeni’s murder in 2016.