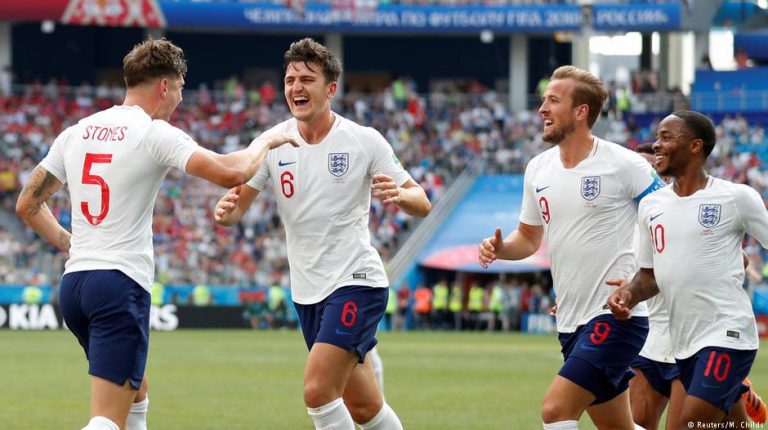 The Three Lions have fallen short of high expectations with alarming regularity. A 6-1 win over Panama doesn’t suddenly make them favorites for the World Cup, but DW’s Matt Ford is pleased that England are fun again.After putting his side 2-0 up against minnows Panama in Nizhny Novgorod on Sunday, the England captain Harry Kane ran to towards the corner flag to celebrate, followed closely by his teammates.

While the England players celebrated however, their opponents grabbed the ball and sprinted back to the center-spot with the intention of re-starting the game while their opponents weren’t looking.

It was a bizarre moment which had some fans wondering if the Panamanians were aware that kick-off cannot take place until “all players are in their own half of the field of play,” according Law 8, Section 1 of FIFA’s Laws of the Game.

Panama might be one of the lowest-ranked teams at Russia 2018, but it seems hard to believe that a squad which features six MLS players would really be so naïve. Having said that, the Panama team also includes players who play their club football in Romania, Slovakia and Guatemala, plus two youngsters from Belgian side Gent’s second team – they really shouldn’t have been expected to pose a problem for England’s star ensemble.

Rise of the underdogs

But quality and reputation can go out of the window at a World Cup, as we’ve already seen in Russia where several big names have been frustrated by stubborn, well-organized defenses.

Portugal and Spain were both forced to work for their 1-0 wins over Morocco and Iran, Argentina were held by Iceland and Brazil were almost embarrassed by Costa Rica. France have so far done just enough against unspectacular opponents, and we all know how close Germany have come to complete failure.

On paper, the top teams are expected to thrash such inferior opposition. Sometimes they do, of course. Germany hammered Saudi Arabia 8-0 in 2002 while Portugal put seven past North Korea in 2010 (although state television told a different story).

This year, England’s Group G rivals Belgium have given two demonstrations of clinical finishing, beating Tunisia and Panama 3-0 and 5-2 respectively. But England don’t do that.

In 2002, there was the drab goalless draw with Nigeria in Osaka. Four years, England left it agonizingly late to beat Trinidad and Tobago in Nuremberg. In Cape Town in 2010, they posed such little threat to Algeria’s goal that a bird perched on the crossbar and remained there throughout the first half.

Fortunately for all involved, by the time Costa Rica held the Three Lions to a 0-0 draw in Belo Horizonte in 2014, England had already been put out of their misery and were on their way home.

And that’s why England’s demolition of Panama in Nizhny Novgorod is noteworthy.

Panama employed all the tactics of the underdog – as is their right; there’s no one way to play football. But England overcame them. Panama’s physical approach, including the man-handling of England players at set-pieces, pushed the limits of what is acceptable but it didn’t stop John Stones heading home Kieran Trippier’s corner.

Nor could a packed defense do anything about Jesse Lingard’s stunning strike from the edge of the box.

In previous years, England’s players have been weighed down a burden of expectation, placed on them partly by themselves and partly by a ravenous media back home.

This year feels different. Gareth Southgate has assembled the joint second-youngest squad at the World Cup and instilled them with clear philosophy and confidence in their own abilities.

The atmosphere in the England camp in Repino, just to the north of Saint Petersburg, is relaxed, as is the team’s relationship with the media –the publication of a team sheet, photographed using a long lens, aside. In short, England are fun again.

A 6-1 thrashing of Panama doesn’t mean that “England are going all the way,” as their travelling supporters have been singing, but it’s a clear and welcome departure from the past.

Thursday’s meeting with free-scoring Belgium in Kaliningrad will be a truer test of just how far they’ve come.