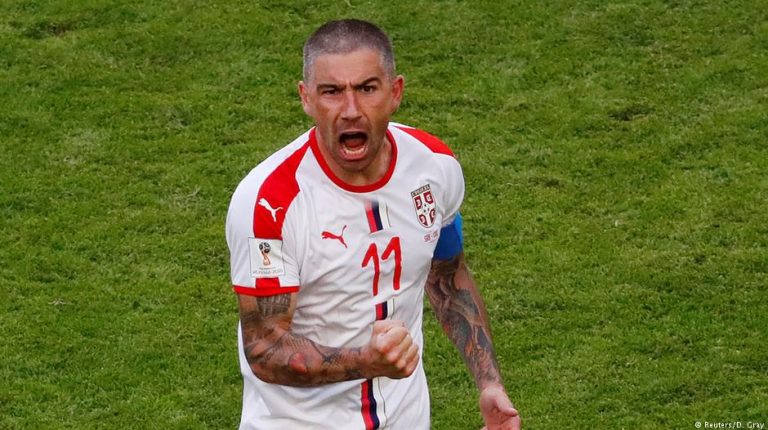 A brilliant second half free kick from captain Aleksandar Kolarov led Serbia to a deserved win over Costa Rica. Serbia were wasteful in front of goal but did enough to secure three vital points in Group E.+++ Refresh page for updates, all times in CEST +++

FULL TIME: They made heavy weather of it, missing several big chances, but Serbia get their Group E campaign off to a winning start. Kolarov’s free kick was an absolute belter in a tournament that’s already had its fair share of those. Our match report will be with you shortly.

90+8- They are going to VAR to see if Prijovic should be sent off for an off-the-ball incident. But it’s just a yellow.

90+5 – Bolanos blazes over from six yards but he was miles offside.

90+4 – We have ourselves a little spat. As the ball rolled out of play a member of the Costa Rican coaching staff picked it up to keep it from Matic. The Manchester United midfielder reacted furiously and mush pushing and shoving ensued. Very odd given the match situation.

90+3 – Kostic breaks clear after a Costa Rican corner but wastes the opportunity with plenty of support.

90+1 – Gamboa has a crack from miles out but it’s comfortable for Stojkovic. There will be five minutes of added time.

89′ – That’s that for Mitrovic. He’s removed for Prijovic.

87′ – Mitrovic finds acres in the penalty area after another excellent Milinkovic-Savic pass but his first touch is poor and he can’t get a shot away. He goes down looking for a penalty but that was just to save his blushes. Two big missed chances for him today. Will it matter?

81′ – Milinkovic-Savic tries to lift one over the defnse but Duarte just gets a toe on it. Serbia make their final change, with Tadic replaced by veteran right back Rukavina. Mladen Krstajic appears to want to protect this slender lead.

76′ – Serbia have ramped it up a bit and could’ve gone two ahead. Tadic got free on the right and tried to measure one to Kolarov but Navas got a critical fingertip to the cross. The Real Madrid keeper has kept his side alive.

75′ – Milinkovic-Savic lets fly from miles out but it’s wild.

73′ – Campbell bursts through for Costa Rica but can’t bring it under his spell and the defender gets across. Costa Rica are starting to trouble Serbia now. They’veplayed a lot deeper since taking the lead and it’s not really working out so well at this stage.

67′ – Joel Campbell comes on for Costa Rica, who haven’t really created anything in the second period. Urena exits.

64′ – Aside from that bad first half miss, Milinkovic-Savic has been very impressive today. He appears to have that rare combination of physicality and genuine technical ability.

61′ – Costa Rica have responded decently to that setback, pinning Serbia back a little without creating anything clear-cut.

56′ – Wow. What a hit from Kolarov. He stands over a free kick about 25 yards out on the right and whips it powerfully past Navas’s right hand. Another sensational free kick, that’s three already in the tournament.

54′ – Kolrav whips in a dangerous ball to the back post aimed at Milinkovic-Savic but it’s just over the Lazio man’s head and goes out for a corner. Which comes to nought.

50′ – HUGE chance for Mitrovic. He lays it off to Milinkovic-Savic and runs in behind to pick up the return ball. He’s one-on-one with Navas but hits it too close to the keeper. Has to score there.

HALF TIME: It sagged a bit in the middle but that was an entertaining half. Milinkovic-Savic missed the chance of the first 45 for Serbia but almost produced a moment of magic near the end. Costa Rica have been second best but aren’t without threat and their best chance was also wasted by Ginacarlo Gonzalez, who put a free header in to the keeper’s arms.

44′ – From a ball over the top Milinkovic-Savic produces a brilliant overhead kick that Navas sprawls to save. The Serbian was flagged offside but replays suggest he was on. Doesn’t matter too much now but had it gone in, VAR would surely have been called upon.

42′ – Costa Rica are starting to get back in to it after absorbing that spell of Serbian pressure. Calvo drags one just wide from the edge of the box.

39′ – Tosic slips in his own box and gives the ball away. Urena demonstrates some silky footowork but blazes over.

36′ – Tadic draws a foul wide on the right and whips in the resulting free kick but Navas flies out to punch clear.

33′ – After an even opening, it’s all Serbia right now. Costa Rica can’t find a way out of their own half.

27′ – Milinkovic-Savic takes down a long ball that dropped over the Costa Rican backline. His first touch is good but his finish is the opposite, he just rolled it at Navas from 10 yards out. Serbia starting to boss this.

24′ – Tadic, who has looked sharp so far, curls one down the line with the outside of his boot, but it’s just ahead of Ljajic who can’t control his cross.

20′ – Calvo is the first name in the book after going right through Tadic. Difficult to argue with that one.

16′ – Tadic slips in Ivanovic and the veteran rumbles down the right and looks to cut it back, but Navas pushes it away.

15′ – Urena almost latches on to a through ball but is denied at the last.

13′ – Milinkovic-Savic finds Mitrovic who has a pop but it’s easily dealt with.

12′ – Big chance for Costa Rica. They work this corner short and there’s an overload at the back post when they whip it in. Gonzalez is in acres but heads straight at Stojkovic. It was very slightly behind him and there wasn’t much pace on the ball but he should have scored there.

5′ – Another corner for Serbia but it’s overhit.

3′ – Gonzalez has a free header eight yards out but it’s straight at the Serbian keeper. Bright start here.

2′ – Mitrovic gets a head to an early corner but can’t get enough power on it. then, at the other end Urena races clear but he’s crowded out. The corner is easily cleared.

13:55 – The national anthems are being belted out and we’re almost ready to go.

13:45 – Here we go again. We’re exactly half way through the first round of group games of the 2018 World Cup. Spain vs. Portugal has been the undoubted highlight of the tournament thus far and all eyes will be on defending champions Germany when they face Mexico in their opening game at 17:00.

But, before the main course, we have an appetizing starter. Costa Rica excelled in Brazil, qualifying ahead of Italy and England before exiting to the Netherlands on penalties in the last eight. They have Keylor Navas, outstanding in the latter stages of the Champions League, in goal but leave out Joel Campbell, the Arsenal winger on loan to Real Betis, who impressed four years ago.

Serbia missed out on 2014 but but have a number of talented individuals to call on. Defenders Aleksandar Kolarov and Branislav Ivanovic have bags of experience at the top level but the jewel in their crown is Lazio’s midfielder Sergej Milinkovic-Savic, who has been linked with a host of top European clubs. Here’s the teams.