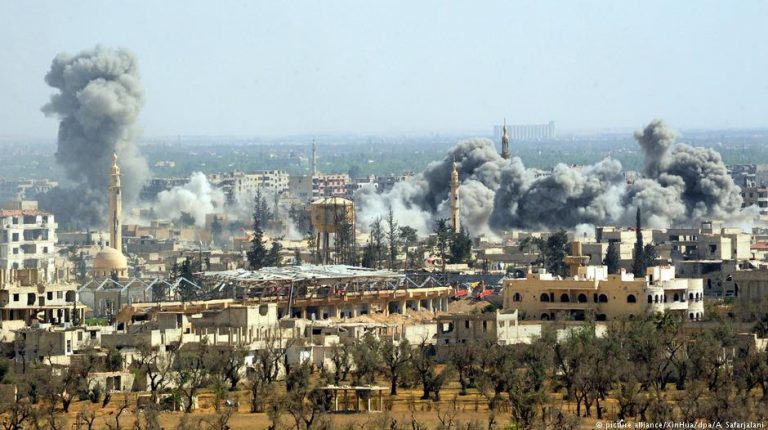 The State Department has said it has evidence the Syrian regime was behind last week’s chemical weapons attack on Douma. As Trump weighs his next move, the US has started moving ships to within striking range of Syria.The US State Department and several officials in Washington said on Friday that they had proof Syrian President Bashar al-Assad’s forces were behind last week’s deadly chemical attack on Douma.

The US government’s assertions come as it, along with the UK and France, continues to mull the scope and timing of a military attack on Syria, raising fears of a potential confrontation with Assad’s key military backer, Russia.

Read more: What foreign powers want from the Syrian war

What is Trump’s Syria strategy?

After tweeting this week that Russia should “get ready for a missile attack on Syria, US President Donald Trump and his security team continue to weigh their options. Nikki Haley, Washington’s UN ambassador, said the president had not yet made a final decision on when or how to strike back.
Should Trump choose to attack, he would likely front a US-led coalition that also includes the UK and France.
Both European countries said they also have evidence Assad’s forces carried out Saturday’s chemical weapons attack, adding that the Syrian regime cannot go unpunished.
The US Navy has already moved its destroyer, the USS Donald Cook, to the Mediterranean Sea, where its Tomahawks would be within striking distance from Syria.

‘Russia part of the problem’

State Department spokeswoman Heather Neuert said, “We know for a fact that it was a chemical weapon, we know that there are only certain countries, like Syria, that have delivery mechanisms and have those types of weapons.”
Asked if the US had proof, Neuert said “yes,” but she added it could not yet be made public.
White House spokeswoman Sarah Sanders said the government had “a very high confidence that Syria was responsible” and that “Russia’s failure to stop them and their continued [lack of action] on this front has been part of the problem.”

Earlier on Friday, Russia accused the United Kingdom of orchestrating a fake chemical weapons attack on Douma, with Russian Defense Ministry spokesman Igor Konashenkov saying Moscow had “proof that testifies to the direct participation of Britain in the organizing of this provocation in eastern Ghouta.”

Germany’s top diplomat Heiko Maas called on the EU and Western powers to step up the political pressure on Russia for its role in the Syria conflict. However, Maas remained cautious over the prospect of a military confrontation, warning that it could quickly lead to an “escalation spiral.”

Risking escalation with Russia: US media on Friday reported that Trump and his advisers were at odds over the scope of a retaliatory strike on Syria. While the president has reportedly been pushing for a more sweeping offensive that would also punish Russia and Iran, Defense Secretary Jim Mattis warned anything more than a “show strike” would risk triggering a broader conflict in the region.

Assad continues to crush rebel forces: Last week’s chemical attack on Douma ultimately led to Assad reclaiming what was once a center of the rebel insurgency on the outskirts of Damascus. With the support of Iranian-backed fighters and Russian air support, the Syrian regime’s position in the country’s seven-year civil war had appeared increasingly unassailable.

Western powers building up: However, television images of young Syrian children struggling to breath prompted international condemnation and pledges from the US, UK and France to retaliate against those responsible. Alongside the USS Donald Cook, the British Royal Navy and a French frigate have also moved into the eastern Mediterranean and within striking of Syria.

Talks between Russia and West ongoing: Amid the rising tensions, Russian President Vladimir Putin and his French counterpart, Emmanuel Macron, spoke on Friday, according to the Kremlin. The two leaders agreed to coordinate future actions related to the crisis, with the aim of avoiding any potential military conflict. “The most important thing is to refrain from ill-considered and dangerous actions that would constitute a gross violation of the UN Charter and would have unpredictable consequences,” the Kremlin said in a statement.

Read more: Why Syria is not the Cuban missile crisis of 2018

DW’s editors send out a selection of the day’s hard news and quality feature journalism. You can sign up to receive it directly here.