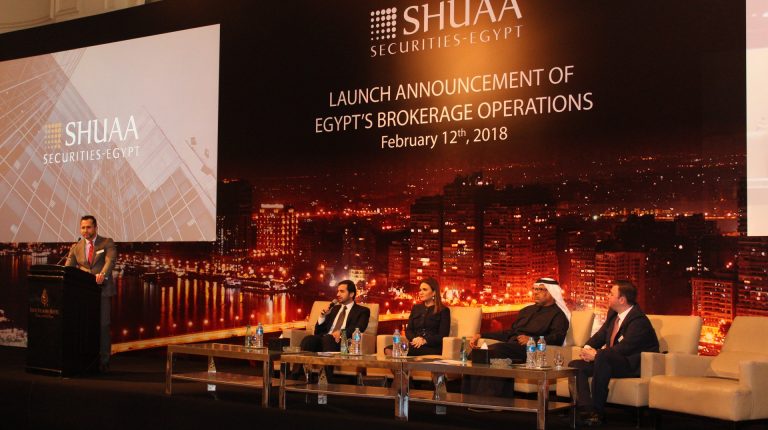 SHUAA Capital, the UAE-based integrated financial services firm, launched on Monday its operation in the Egyptian market amid a heavy presence from Egypt’s top officials including Minister of Investment and International Cooperation Sahar Naser and Egyptian Exchange Chairperson Mohamed Farid.

SHUAA has officially commenced operations in the Egyptian market, after being given the green light by the Egyptian Financial Regulatory Authority (FRA).

With an initial and dedicated 40-person strong task force, SHUAA Securities Egypt has been successfully executing its first transactions since being granted approval on 11 November 2017.

SHUAA Capital had earlier confirmed a regional growth and development strategy via both organic and inorganic prospects, and the launch of SHUAA Securities Egypt is testament to the group’s turnaround roadmap. This official presence out of Cairo is a natural extension to SHUAA’s broader brokerage network, allowing retail and high net worth clients from across the region easier access to Egyptian capital markets.

Jassim Alseddiqi, chairperson of SHUAA Capital, said: “SHUAA Securities Egypt is an important component of our work to offer clients access to the region’s key capital markets. Due to the country’s strong economic fundamentals and depth of available opportunities, we have received strong interest in the Egyptian market from clients in 2017. SHUAA Securities Egypt will enable us to meet this demand and help us to deliver another significant element of the group’s long-term growth strategy. We thank Egyptian authorities and regulators for their support and guidance throughout the process.”

Securities brokerage is a vital business line for SHUAA’s overall Capital Markets service offerings. Through a strategic move, the group had recently entered into an agreement to acquire Integrated Securities, the leading UAE-based brokerage firm, thus boosting SHUAA’s regional client base, and allowing it to benefit from synergies and better streamlining of operations. Today, the re-engaging of the Egypt market by a much stronger SHUAA Securities is expected to pave the way for further expansion by the group’s other business lines on the North African platform over the medium term.

The company reported last week its full year results for 2017, with the company achieving its highest sustained full year earnings since 2007. In what has been widely viewed since the first quarter as a clear model of a turnaround story, the Middle East and North Africa’s most recognised financial brand, SHUAA, reported AED 74m in profits for 2017 (2016 recorded AED 132.5m losses), a 156% upward movement.

Fourth quarter results saw a notable emergence from a loss of AED 18.9m in the fourth quarter (Q4) of 2016, rising to a profit of AED 14.2m for Q4 2017. Revenues for the last quarter of 2017 were AED 42.8m, a 22% increase from Q4 2016 revenues of AED 35.1m. In the midst of a challenging year for regional markets, and under the guidance of a strategy built on strong fundamentals, all of SHUAA’s five business lines attained optimal performance levels and maintained healthy revenue streams.