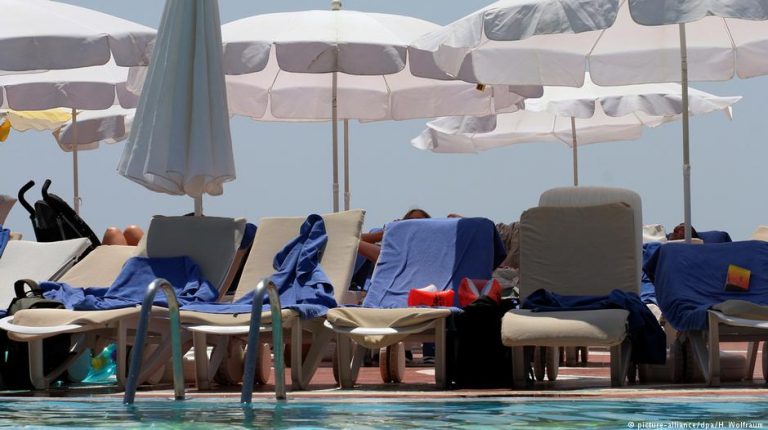 The dawn dash to reserve the best sun-lounger by the pool – for years German and British tourists have fought this bitter battle. Now the fight will commence before the holiday – at the travel agency to be precise.Travel operator Thomas Cook will be offering their customers the chance to book their preferred poolside spot before their holiday begins, at a price. The new service will cost 25 euro per lounger.

The Anglo-German company says it is the first package holiday firm to offer this service, which it is trialing at three hotels in Lanzarote, Gran Canaria and Fuerteventura from the end of February. By the summer it is to be introduced at over 30 hotels. Between 10 and 20 percent of a hotel’s sunbeds will be bookable to ensure there are enough available for those who don’t want to book.

The UK’s Sun tabloid newspaper celebrated the Thomas Cook offer as a victory of the Brits over the Germans. There was just one flaw in that theory – the service will be available to both German and British holiday makers, as Thomas Cook also owns the German travel companies Neckermann and Öger Tours.

Customers will receive an email six days before departure asking if they would like to choose their sun-bed in advance. They will be able to choose their preferred spot on a pool plan, which also lists restaurants and bars as well as featuring a compass to help them work out what time of the day areas will be in the sun or shade. The loungers are bookable with a few clicks online and the sun-bed will be marked with the room number of the guests.

So the question is: who will get the mail first, the British or the German holidaymaker? And who will manage the quickest response? It appears the towel war has merely entered a new battlefield.