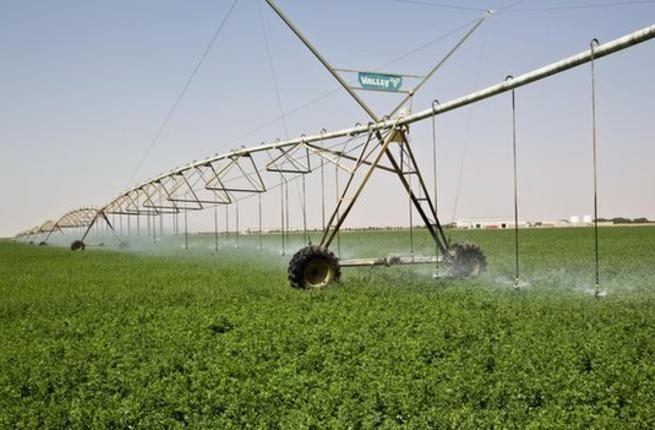 The General Authority for Reconstruction Projects and Agricultural Development (GARPAD) has placed responsibility for its losses over the past 10 years on the Ministry of Irrigation and Water Resources and the Ministry of Electricity and New and Renewable Energy.

Parliamentary sources said that GARPAD officials, during a meeting with parliament’s planning and budget committee to discuss the plan and the budget on Sunday and Monday, reported that the Ministry of Electricity failed to establish electrical transformers in the territories under the jurisdiction of the GARPAD, which put the authority behind its schedule.

They also blamed the Ministry of Irrigation and Water Resources for not delivering the agreed amounts of water to its land, which prevented its ability to reclaim more land as planned.

However, officials from both ministries responded stating that there are infringements on the quantities of water rationed for agricultural development projects.

They added that the electrical transformers have been installed, but were stolen in the five-year security vacuum following the January 25 uprising.

An official at the Ministry of Electricity said that the ministry will bear the cost of the new transformers in its designated areas, but if they are in villages that do not follow its jurisdiction, the judicial control of any facility will penalise the persons or the entity subject to the violation.

“We are not related to the losses of the GARPAD, and the theft of the transformers is outside the distribution companies’ framework,” said a Ministry of Electricity official.

A member of the planning and budget committee said the value of the transformers stolen during the five years following the 25 January revolution was about EGP 54m. “The Electricity Ministry refuses to be blamed for the GARPAD’s losses,” the official stressed.

The person added that parliament, during its last session, referred the GARPAD violations to the Administrative Prosecution for investigation.

“We await the results of those investigations and, until that moment, we seek to identify the problems faced by the authority closely,” the official said.

Daily News Egypt reported in April that the planning and budget committee of parliament rejected the final financial statement of the GARPAD during the previous fiscal year.

A memo was then sent to Ali Abdel Aal, speaker of parliament, to ask him to refer the file to the attorney general.

The land under the jurisdiction of the GARPAD is 6.2m feddans in accordance with Law No. 341 of 2014 and 61 of 2016, including 1.062m feddans allocated by the GARPAD to the Egyptian Countryside Development Company for the purpose of offering them to investors and youth within the national project.

The authority suffers from inefficiency in the management of its assets and land portfolio of 6.2m feddans in various regions of the republic.

This led to the increase of its indebtedness to the National Investment Bank (NIB) for more than EGP 30bn, while the principal amount was of EGP 7bn.

The authority achieved revenues of EGP 204m, compared to EGP 105m during the previous fiscal year, reflecting a real crisis in the management of the land portfolio owned by the authority.

For his part, Hossam Imam, spokesperson for the Ministry of Water Resources and Irrigation, said that the current period has a winter blockage, adding that the ministry is working to deliver water to the ends of the canals in ways that do not harm crops.

He added, “normally, any problem facing the authority, they address the ministry and we intervene and resolve the crisis, but we have not received complaints in this regard.”

The board of directors of the GARPAD is chaired by the minister of agriculture and land reclamation. Its members include the Ministers of Housing, Utilities, and Urban Communities; Investment and International Cooperation; Water Resources and Irrigation; and Local Development, as well as the deputy minister of agriculture for land reclamation, director of the National Centre for Land Use Planning, a representative of the Ministry of Defence, and a representative of the Ministry of Finance.

Agreement between GARPAD, Al Ghurai for sugar production worth $1bn

EGP 80bn total losses of  “Maspero” and “Railway” and “GARPAD”