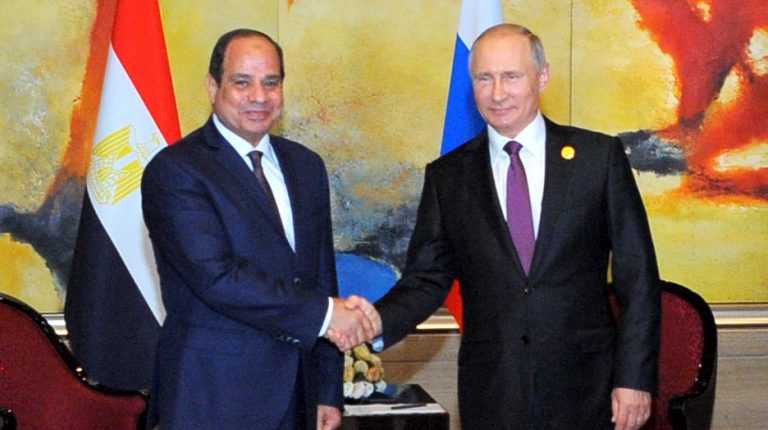 Egyptian President Abdel Fattah Al-Sisi and his Russian counterpart Vladimir Putin will witness the signing of the Dabaa nuclear power plant agreement on the sidelines of Putin’s upcoming visit to Cairo on Monday.
Government sources told Daily News Egypt that the total cost of establishing the plant is $30bn, pointing out that Egypt will recover the plant’s construction cost within 13-15 years.

The sources added that the Dabaa plant will cost Egypt about $60m annually to purchase the required nuclear fuel, while the operation of a power plant using gas turbines with a similar capacity would cost $200m annually.
Russia will provide Egypt with a $25bn loan, equivalent to 85% of the construction cost. The loan is due to mature after 13 years, with 3% annual interest.

The sources pointed out that Putin’s visit will also witness signing a contract to establish a Russian industrial zone in the Suez Canal area. They expect Russia will resume its flights to Egypt by January 2018.
Ali Abdel Nabi, former deputy head of the Nuclear Power Plants Authority (NPPA), attributed the high establishment cost of Dabaa plant to several considerations, most notably, the potential political and economic risks of any dispute between the two countries. In case Egypt could not repay its dues to Russia, the nuclear deal’s case would be transferred to the Association for International Arbitration.

Abdel Nabi expressed his concern that in case Egypt delays implementing the nuclear project, it would cost the country very high fines and interests, much higher than those agreed with Russia.

A delay in implementing the project would also increase the cost of the plant’s construction, because scrapping the station and the used fuel would also be included in the costs.

Abdel Nabi said that the production cost of electricity from a nuclear plant is cheaper than power plants using gas turbines, adding that nuclear power plants are likely to run efficiently for 80 years.

He further added that the Dabaa plant will operate with a capacity of 4,800 MW, providing electricity for 10 million housing units with a consumption rate of 200-300 kW per month.

Egypt will need about 24 months to obtain safety and security approvals before it begins establishing the nuclear plant.

Dabaa nuclear plant contracts expected to be signed next month