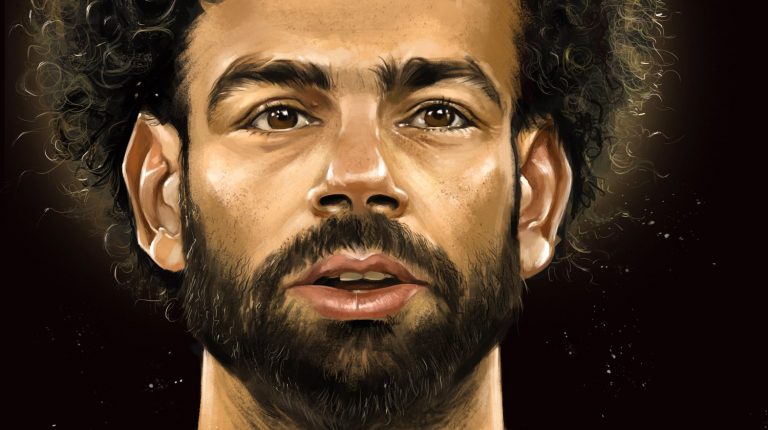 She struts in her glamorous pair of high-heeled sandals right through the metal gates, and suddenly, what was only a mere daily destination turns into a flashy runway. As she goes through the poultry fridge, the super market’s tiles reflect the fluidity of sky-blue satin and curvy details of lace.

It is only minutes before she sets her own garden of juicy fruits accompanied with sherbet florals planted in a captivating shade of blue. Nonetheless, madness does not evoke until she inflects her appreciation of drama and spice right on the surrounding shelves.

Water flows on the ceramic floor as gracious and fast as the tail of her dreamy dress. Meanwhile, her geometric jewelry lightens up the space with shades of gold strong enough to demand vintage shades.

This might sound close to vivid dreams of a true fashion fanatic. However, thanks to a recent editorial shoot, these couture dreams have become a tangible reality in the heart of the city’s Fresh Food Market.

Photographers Hady Ashraf and Marwan Morsy, as well as Cairo-based makeup artist Haya Bahaa and Diva Line’s stylist Amr, found themselves at the extraordinary venue and surrounded by the country’s most extravagant fashion creations, thanks to Flare PR agency. The home-grown fashion hub brought their top-notch data base to the urban supermarket to create their first, of many, Egyptian multi-brand collaborative shoots.

With that said, the shoot’s unexpected model was also another factor of surprise. Anicée Gohar, a TV presenter, producer and director, plays the significant role of a fashion-forward introvert dying to escape the party, but not the beat playing in her head.

The shoot gave Gohar the chance to escape a metaphoric commotion in order to start her own outrageous party at a closed and serene supermarket with only her name on the guest list.

This project mainly aims to highlight the major milestones local designers have managed to achieve during the past five years. Meanwhile, it also plans to put those designers on the global fashion map.

Colours of Joy: a rainbow of local eyewear for every woman

Deena Wagdy: a timeless declaration of strength adorned with pearls

Jude Benhalim wears the city’s “Urban Vibrance” on her sleeves