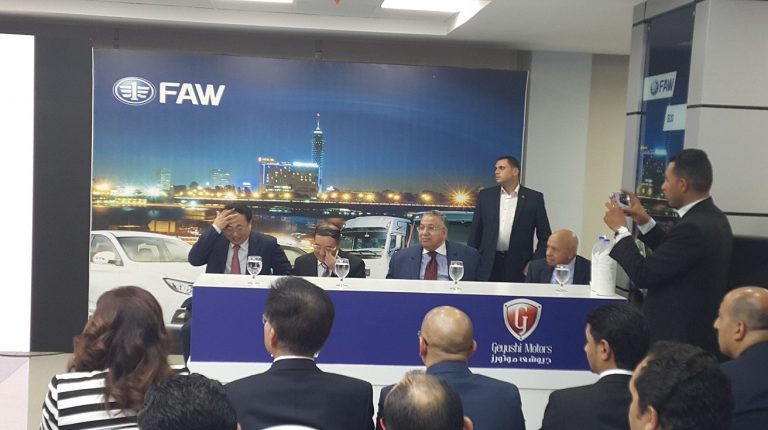 Geyushi expressed his delight over the agreement, saying, “we are delighted to cooperate with FAW, one of the world’s largest companies. It is owned by the Chinese government and has an annual production capacity of about 3 million vehicles.” Under this cooperation, Geyushi Motors will become the exclusive agent of FAW in Egypt and will assemble the Chinese car locally to export it to Africa and the Middle East.

“This partnership is an important milestone for us. A FAW plant will be established in Egypt, through which the company will be transformed from a dealer and agent to an automotive assembly factory,” said Geyushi. He added, “we have conducted comprehensive feasibility studies to evaluate this huge investment in the Egyptian market.”

On this occasion, six new models of the Chinese FAW have been launched addressing most of the Egyptian market’s customers. They included B50, B30, and X40 models.

Geyushi Motors has also set up two after-sale and maintenance centres in the Katameya area to promote a professional image and achieve increased efficiency.

Wang Zeitian stated, “Egypt is the jewel of Africa and has excellent political, economic, and legal systems, and these features help the FAW Group to develop its international trade.”

Zeitian went on to say that “under this agreement, the FAW Group will start a new phase in Egypt, as we will focus on introducing modern cars with the best international standards.”

He affirmed his company’s keenness to meet the requirements of the Egyptian market as well as to contribute to the development of the car market in particular and the local economy in Egypt in general.