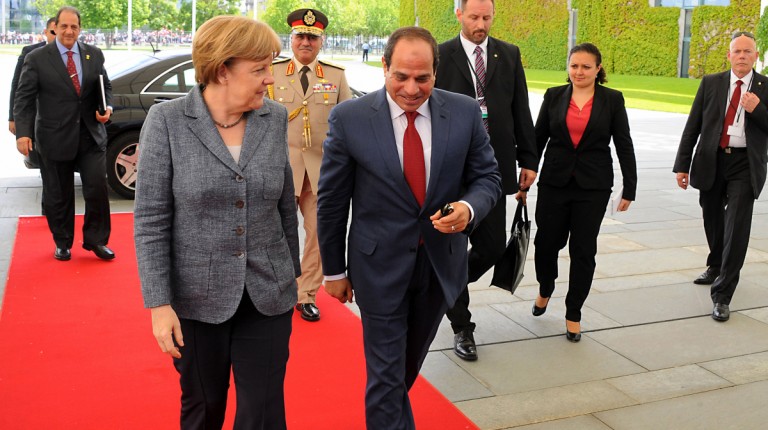 Egypt’s president Abdel Fattah Al-Sisi headed to Germany on Sunday to attend the German-African Summit, according to a presidential statement.

President Al-Sisi is scheduled to meet with Merkel and several German ministers during the summit to discuss bilateral cooperation in the economy, politics, security, and illegal immigration. These discussions will not neglect the issue of ongoing tensions in the Middle East and plans to combat terrorism, according to Egypt’s state-owned Middle East News Agency (MENA).

Germany has expressed opposition to the recent decision of Egypt and Gulf states to cut diplomatic ties with Qatar. Germany’s minister of foreign affairs and vice chancellor Sigmar Gabriel said that the tensions between Qatar and other Arab states “could lead to war”; however, he expressed that there is potential to reach an agreement, according to German local media.

“We must try to find solutions, especially lifting the sea and air blockades,” Gabriel said in an attempt to clarify Germany’s intentions to cooperate with Arab states and the United States (US) to resolve the crisis, Reuters reported.

Germany encourages and supports a dialogue to reach a diplomatic solution in the region.

Several major international political powers expressed their support for diplomatic efforts, including Russian president Vladimr Putin, who encouraged political dialogue to Emir of Qatar Tamim bin Hamad Al-Thani, and US president Donald J. Trump, who offered to host the conflicting parties at the White House in order to reach an agreement.

Qatar has reportedly expressed no interest in receiving any support from international initiatives or mediation, adding that Qatar “would not compromise its sovereignty over foreign policy.”

On 5 June, Bahrain, United Arab Emirates (UAE), Kindgom of Saudi Arabia (KSA), and Egypt, among other countries, announced they would cut diplomatic ties with Qatar and shut down air and sea ports for Qatari transports, in response to “Qatar’s support for terrorism and intervening with other counties’ policies.”

The decisions came after the Emir of Qatar allegedly published accusations against Egypt and the Gulf states that claimed they were conducting campaigns against Qatar’s image with claims that Qatar supports terrorism. The emir added that these countries should “reconsider their antagonistic stance against Qatar.”  The claims were published in May on Qatar’s state-owned news agency QENA and created mass tension that culminated into the split.