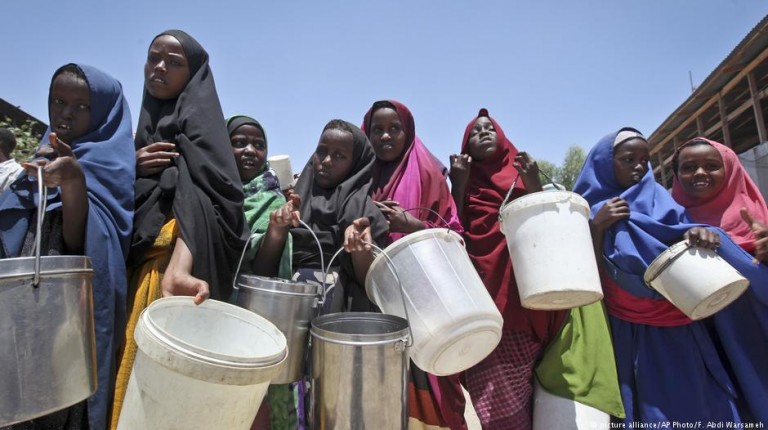 We can survive for weeks without food – but without water? That’s a different story. Yet all over the world, people and wildlife alike are having to cope without it. We take a look at the devastating impact of drought.Somalia

Nowhere in the world is the lack of water being more keenly felt at the moment than in Somalia. No water to drink or to grow food and nothing to give their ailing livestock – drought has the Horn of Africa region in its deathly grip. More than 110 people died within a single 48-hour period earlier this month, according to Somalia’s prime minister, but millions more are at risk.

Somalia usually has two seasons of rainfall: Deyr from October to December, and Gu, which begins in March. But for two years, there has been significantly less rainfall than normal – a disaster for agriculture dependent on rain water rather than irrigation.

The UN has called for governments all over the world to contribute to aid in order to help the almost three million people, including 185,000 children, in need of life-saving measures. With such help, the UN hopes to avoid famine – but it is not coming fast enough.

Drought is not just a human problem – it’s also having a big impact on the animal world. In Australia, the koala is one of the species most affected. A study carried out in south west Queensland in 2011, found that the population in the region dropped by 80 percent between 1995 and 2009, with drought having a particularly significant impact.

Koalas have also been seen climbing down more often from their normal homes in eucalyptus trees to find water on the ground, where there is an increased risk from predators. Already recorded as ‘vulnerable’ on the IUCN’s Red List, scientists fear that with the changes in climate being brought about by global warming, the cuddly creatures could soon be at risk of extinction.

These trees were once submerged to the tops of their branches in water. Then the earth around them became cracked and dried out. It’s hard to believe that this is the bed of one of the world’s biggest dams. The desert-like conditions of the Guri dam spelled near disaster for Venezuela, a country dependent on hydropower for around 60 percent of its electricity.

But this was the situation in 2016 following a multi-year drought. Electricity and water rationing became a necessity in a country where the population was already suffering the hardships brought about by inflation and economic crisis.

While the drought has now come to an end, the critically low waters measured in the dam last year could mean continuing electricity rationing for residents this year.

Sunburn is taking its toll on hippos in Kenya. They usually rely on mud to cover themselves in a layer of protection, but watering holes have all dried up, leaving just dirt. The Kenya Wildlife Service has rushed to rescue animals impacted by the devstating drought, but some estimates report that more than 30 hippos have already died in Lamu, in the east of the country.

The non-profit organization Care for Wildlife Kenya has called for “immediate relief” to help the large mammals, taking water to the areas most impacted. But a more long-term solution for the future is yet to be found.

A series of wildfires exacerbated by drought and high temperatures ravaged hundreds of thousands of acres of forestland in Chile. Countries including Mexico, Colombia, France, Portugal and the US provided assistance in fighting the fires, but thousands of Chileans lost their homes to the flames.

Chile’s President Michelle Bachelet said the fires were the “worst wildfires that Chile has suffered in its history.” But it is not the only country to have been hit hard by large forest fires, which experts say are worsening with climate change. Canada, the western United States, and parts of Europe were all forced to battle blazes over the past year.

81.5% of total water resources in Egypt consumed in agriculture: CAPMAS

The business of wastewater