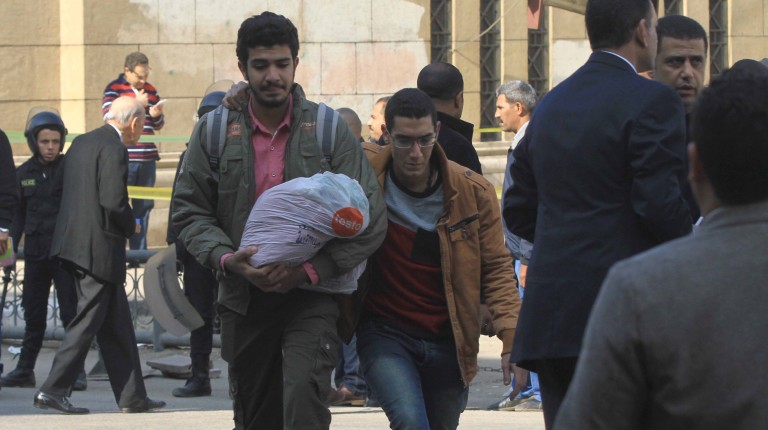 Images portraying the torn-apart body of the alleged 22-year-old suicide bomber who carried out the attack on St. Peter and St. Paul Church dominated media outlets on Monday.

Sunday’s attack on the church killed 25 people and injured another 49 when the bomb went off. The church is located within Egypt’s main Coptic Orthodox Cathedral in Abbasiya.

During a funeral organised by the state for the attack’s 25 victims at the Unknown Soldier Monument located in Cairo’s suburb of Nasr City, President Abdel Fattah Al-Sisi said that the suicide bomber, Mahmoud Shafiq Mohamed Mostafa, entered the church and detonated an explosive belt.

Following Al-Sisi’s announcement that Mostafa was the man responsible for the attack, conflicting reports emerged about the alleged perpetrator.

The 22-year-old suicide bomber was previously arrested in 2014 for being tied to the Muslim Brotherhood. Mostafa and another young man had been in possession of a gun while they had participated in a rally organised by the Brotherhood, according to Mahmoud Saadawi, who was his lawyer in 2014.

“Mostafa was arrested in March 2014. He was 16 years old and faced brutality and torture while in police custody,” Saadawi told Daily News Egypt on Monday.

Mostafa and another man appear in an article published in 2014 by the privately-run Al-Watan newspaper. The two young men appear in a photo attached to the article, their faces bloody and bruised, with a gun and bullets on a table in front of them.

“Security apparatuses based in Fayoum governorate succeeded in arresting two members of the Muslim Brotherhood with a gun and bomb after they assaulted citizens. They were arrested after police forces intervened to disperse the Brotherhood rally. The two young men are named Ali Mahmoud Abdel Mawli and Mahmoud Shafiq Mohamed Ahmed,” read Al-Watan.

Daily News Egypt observed a striking similarity between the photo used by Al-Watan and those sent by the prosecution to the state-run Akhbar Al-Youm newspaper featuring the alleged suicide bomber.

Both photos depict the same person, although the name published in the 2014 Al-Watan article is not wholly identical to the name echoed by Al-Sisi during Monday’s funeral. The 2014 story said the arrested man’s name is Mahmoud Shafiq Mohamed Ahmed, while Al-Sisi proclaimed the alleged suicide bomber to be Mohamed Shafiq Mohamed Mostafa.

Akhbar Al-Youm reported that the suicide bomber was arrested in 2014 in Fayoum and was sentenced to two years in prison over misdemeanour charges. The newspaper was reporting off the criminal record it had received from the Ministry of Interior.

Saadawi confirmed that his client had received a two-year prison sentence, noting that prosecution authorities had allowed his client to be released on bail.

“At that time, he was glad to be out of prison and was to appeal against the two-year sentence. However, later I did not hear anything else from him,” said the lawyer.

As Saadawi previously mentioned, his client was 16 at the time of his arrest in 2014. However, Al-Sisi stated that the suicide bomber was 22 years old, marking a six-year age difference despite only two years having passed.

In Cartoon: Imprints of the murderer

Arab institutions save EGX from repercussions of church bombing