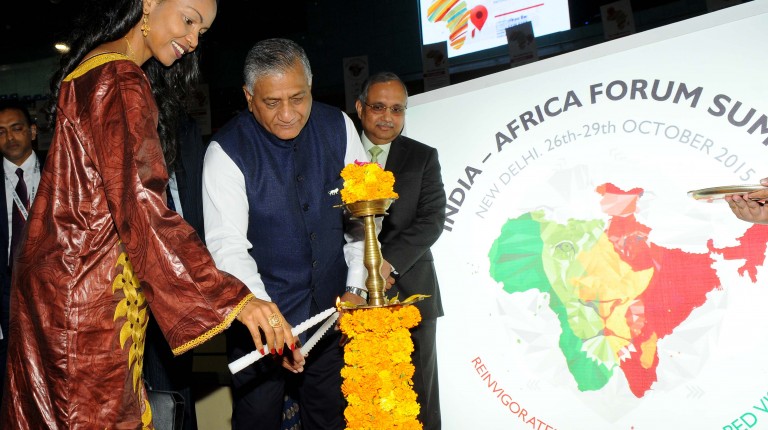 Until she travelled abroad when she started college, Zara Mwanzia had thought that chapati—the delicious bread she ate while growing up, which most Kenyans still eat—was a local delicacy. “I was surprised to find out that chapati actually originated from India,” she said, musing at how she had been wrong all those years.

Zara could be forgiven for her ignorance of the pervasiveness of India’s cultural influences in eastern and southern Africa. Tea is another Indian dietetic influence on local customs. In the Kenyan capital of Nairobi and around the country, teatime has an Eastern influence: India’s chai—a mix of milk, tea, sugar, and spices—is the drink of choice over other beverages normally served at breakfast and other mealtimes.

Cultural and trade relations between India and Africa extend beyond chapati and chai, going back to ancient times—from early fourth-century trade, through Britain’s shipments of Indian labour to work on colonial projects, to political cooperation during the struggle for Africa’s independence.

The Indian population in Africa, including people of Indian descent, was estimated to be about 2.7 million in 2015. More than half of them are settled in South Africa, a third in Mauritius and some in the East African countries of Kenya, Tanzania, and Uganda.

We are “old friends and old family”, said Nirmala Sitharaman, India’s minister of state for commerce, at the Third India-Africa Forum Summit (IAFS-III) in October 2015. Held every three years, the summit is used by India to discuss trade and investment opportunities with African leaders and to foster diplomatic relations.

At a time when African countries are looking eastward, shifting attention away from their traditional western economic partners, and when Asia’s booming economies are rushing to invest in Africa, a shared history appears to help in boosting trade and investments between African and Indian “friends and families”.

A four-nation African tour by India’s Prime Minister Narendra Modi in July 2016 (his first ever), on the heels of President Pranab Mukharjee first-ever visit to the continent a month prior, is the strongest signal yet of revived interests between “old friends”.

Data from the Indian government and the African Development Bank shows that bilateral trade between India and Africa rose from $1bn in 1995 to $75bn in 2015.

From 2010 to 2015, Nigeria was India’s largest trading partner in Africa with $1.6bn export-import volume, followed by South Africa with $1.1bn, while Kenya came third and Mozambique fourth.

Overall, since 2010, India’s exports to Africa have increased by 93% while imports rose by 28%, according to Africa-India: Facts & Figures 2015, a joint publication of the United Nations Economic Commission for Africa (ECA) and the Confederation of Indian Industry (CII). Africa’s share of India’s global exports rose from $17.9bn in 2010 to $34.6bn in 2015, according to the report.

With $64.2bn from 2000 to 2012, Mauritius is by far the main destination for India’s foreign direct investment (FDI), according to a 2015 publication of the South African Institute of International Affairs.

Yet that amount, which represents three-quarters of India’s total FDI to Africa over the same period, is skewed because Mauritius is a tax haven for foreign investors, the report suggests. The sizable investments in Mauritius, the report says, are linked to American companies’ taking advantage of favourable fiscal rules to route their money through the country. They invest in India through Mauritian companies.

Private sector in the driving seat

India’s investments in Africa continue to expand. Bharti Airtel, the New Delhi–based telecommunication giant, is an example of India’s extensive private-sector presence across the continent. The company has been the market leader in 18 African countries since it entered the market in 2010 after taking over operations from Kuwait’s Zain Telecom in a deal valued at more than $10bn at the time. With over 76 million subscribers as of March 2015 and a workforce of about 5,000 people, Airtel is now the second-biggest telecom operator in Africa.

Tata Africa Holdings, with a base in Johannesburg, South Africa, is another highly recognisable Indian company in Africa. Its vehicles, including trucks, semi-trucks, and public transportation buses, branded with its red-and-white logos, are common on African roads.

Tata Africa Holdings businesses go beyond vehicle assembly, however. Strongly present in 11 countries, it is also involved in information technology, chemicals, steel and engineering, hospitality, energy and mining. In 2016, the company declared investments in Africa in excess of $145bn and a workforce of 1,500.

On the other hand, India-bound investments from Africa are about $65.4bn, according to Africa-India: Facts & Figures 2015. Most of the investments were by Mauritius-based companies, with South African multinational companies’ investments in infrastructure development, breweries and financial and insurance services accounting for less than $1bn. But a South Africa-based Institute of Strategic Studies (ISS) report predicts African investments in India are likely to keep growing.

At the end of the 2015 India-Africa Forum Summit, Prime Minister Modi announced a $10bn line of credit over the next five years for Indian companies wishing to invest in Africa. He also promised grant assistance of $600m, to include an India-Africa Development Fund of $100m, an India-Africa Health Fund of $10m, and 50,000 scholarships for African students in India over the same period.

If such announcements at the previous India-Africa summits in 2008 and 2011 are any indication, the line of credit and grant will support projects in many African countries. An earlier grant of $7.4bn was geared towards 137 projects in 41 countries, the joint ECA-CII report pointed out, while another grant of $500m funded capacity-building projects, including setting up specialised institutions, providing scholarships and training programmes, and implementing the Pan-African e-Network project. The e-network currently connects 48 African countries. In addition, in the past three years alone, 25,000 Africans have been trained or educated in India.

During a visit to Ghana in June this year, President Mukherjee said his African tour was part of a wider outreach and would be followed by Prime Minister Modi’s to more African countries. This, he reportedly said, meant: “Africa, we stand by you.” A month later, Modi visited Kenya, Mozambique, South Africa, and Tanzania, where he signed several bilateral agreements with his hosts.

Egypt, Philippines to establish business council by end of 2016

Kashmir remains tense after days of protests and clashes