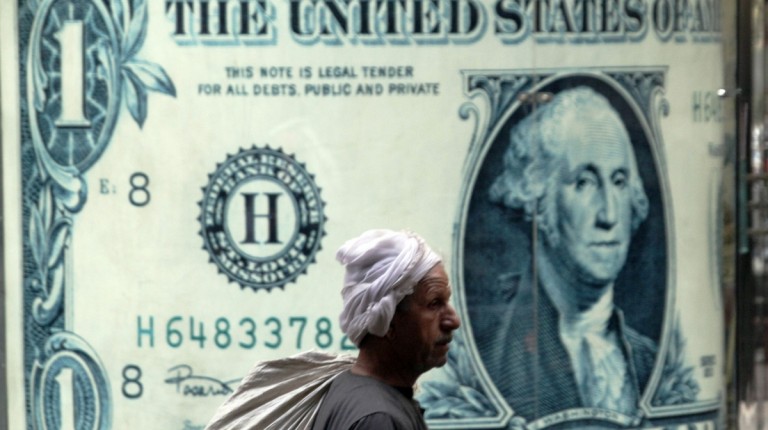 Low investment levels and the shaky tourism industry have been the primary causes of the dollar shortage in Egypt, a country that is heavily dependent on imports.

The situation has given the informal market more control over the available foreign currency, which eventually caused a huge discrepancy between the official dollar price (EGP 8.7) and the unofficial price, which peaked at EGP 11 last week.

In Egypt’s FY 2016/2017 draft budget, the dollar price registered EGP 9.25 as the official price, which economists believe is driving up the value of the dollar on the informal market.

The value of the US dollar against the Egyptian pound has long been a major shaper of Egypt’s economic status, and currently economists believe the pound is overvalued due to state regulation, anticipating it will break the EGP 10 threshold in the official market this year.

In order to curb the issue of lack of dollar liquidity and the devaluation of the Egyptian pound, which has been falling in the past two years, the Central Bank of Egypt (CBE) imposed restrictions on dollar transactions. Last month, for example, banking customers reported that they could not withdraw their dollar savings in local banks, even if the account is in foreign currency.

However, as banks say they do not have US dollars, customers are unable to access dollars except via the informal market.

As this policy failed to stabilise the value of the Egyptian point, the CBE decided in mid-March to ease the issue and it lifted the monthly cap on dollar deposits and withdrawals for individuals. This compared to CBE’s previously imposed limits on deposits, at $50,000 per month and $10,000 per day.

The CBE also lifted the cap on dollar deposits and withdrawals for companies.

Furthermore, the government attempted to address the issue by curbing spending on what it perceived as “unnecessary products”, banning the imports of 23 “luxury” products if their factories did not register with Egypt entities.

Research advisories, such as Prime Holding, started to look for ways to save the foreign currency for the state. Last week, Prime Holding issued a paper detailing the possibility of saving $20bn from the $60bn being spent on imports.

Prime Holding advised increasing imports of crude oil and building oil refineries instead. The paper proposed depending on locally-produced polypropylene, in light of the government project to establish a $680m factory to produce the material.

It also recommends the application of strict laws that criminalise building on agriculture lands for wheat production.

Moreover, economic expert and professor Mohamed Alaa Mostafa said all the measures undertaken by the government failed to resolve the dollar scarcity, as the government has not addressed the issues that affect the availability of foreign currency in Egypt.

In the past four months, CBE, under the new leadership of Tarek Amer, introduced new measures and policies aiming to strengthen the pound’s value against dollar.

“The measures introduced by the CBE, such as new policies regulating the procedures by which importers are provided with foreign currency through local banks, are what fall under the jurisdiction of the CBE,” Mostafa said, saying that the CBE should not be the only authority held responsible for escalating the dollar issue.

The CBE’s interventions in the exchange market, whether by increasing or depreciating the pound’s value, did not mitigate the lack of dollar availability in banks to cover their customers’ needs, allowing the parallel market to continue operating throughout 2016.

According to Mostafa, the government could have stepped in and helped the CBE by increasing sources of foreign reserves.

He said the deteriorating economic situation in Egypt, which has negatively affected tourism, foreign direct investments, and Suez Canal traffic, are also pressurising the unavailability of dollar.

Suffering tourism sector is a main player in dollar crisis

Egypt relies on tourism as one of its main sources of foreign exchange, as it represents a significant part of the Egyptian economy. The tourism sector was said to have lost $15bn over the past five years, according to previous statements by head of the Egyptian Tourism Federation Elhamy El-Zayat.

The crisis was amplified when a Russian plane crashed in Sinai on 31 October, killing all 224 passengers and crew members on board. Following the crash, Russian president Vladimir Putin issued a decision to ban all Russian airlines from landing in Egyptian airports. The UK also banned flights to Sharm El-Sheikh.

Sharm El-Sheikh has suffered the consequences of the crash the most, since Russian and British tourists left the city on their governments’ orders. Local and small businesses that depend on tourism for their livelihoods were abandoned.

Tourist levels have continued to fall following the crash. Tourist arrivals to Egypt fell by about 45.9% in February in a year-over-year comparison, according a report issued by the Central Agency for Public Mobilisation and Statistics (CAPMAS) this month.

Government campaigns after this accident focused on promotional ads. Also, new Minister of Tourism Yehia Rashid announced, after taking his post, that the ministry has “an urgent plan” to restore tourism over a six-month period, in coordination with Minister of Civil Aviation Hossam Kamal, to raise the quality of airline services.

Marketing manager of a tourism office in Cairo Ayman Mamdouh said these plans and campaigns will not succeed in restoring tourism, nor foreign reserves, “if the main issue is still present”, he said, referring to the unstable security status.

What is being done to address FDI decline?

Egypt has often faced criticism over its investment environment, in particular the extensive bureaucratic procedures required to launch new projects. In an attempt to address the issue, last year the government launched a new law aiming to unify the required procedures into a “one-stop-shop” system, but the law has yet to be implemented.

The government aims to attract $8bn to $9bn worth of foreign direct investment during the current fiscal year. However, it is challenged by a weak investment climate.

The lower ranking in the Doing Business index was due to the multiplicity of authorities that grant licences to investors and the absence of one-stop shops that provide all services to investors. It was also attributed to energy and gas shortages, which have negatively impacted the industry and new investments over the past four years.

Investors rely on the World Bank’s report to make their investment decisions as the report reveals the advantages of investing in different countries and the challenges they should expect.

Therefore, in February the government founded a committee to improve procedures in all fields based on criteria provided by the World Bank in the report to provide a sufficient climate for business that can attract investments.

Chairman of Orascom Development Holding Samih Sawiris said the investment climate in Egypt is the worst in the Arab world because of an ambiguous plan regarding the currency exchange rate and the absence of an accurate price for the local currency, which he said makes it hard for investors to calculate their return on investments.

“The Egyptian economy needs $7bn this year to be able to overcome the dollar shortage crises,” Sawiris said. This must be followed through by revitalising tourism to draw in dollar revenues and dollar transfer via Egyptians abroad who should relinquish them in the banking system instead of selling them to the informal market.

New Investment Minister Dalia Khorshid said in April that the ministry will put forward a professional strategy to attract local and foreign investments based on better promotion, advertising the one-stop shop for investment projects, and resolving disputes and arbitration between the state and investors.

Also, initial reports of the value of Egyptian non-petroleum exports between January and November 2015 totalled $16.76bn, recording a 17.3% decline compared to $20.27bn in the corresponding period of 2015.

Minister of Industry and Foreign Trade Tarek Qabil announced a cabinet programme to support exports with subsidies of EGP 1.5bn in 2016 and 2017. The programme provides funds to the food, chemical production, engineering, and textile industries. The programme will support exporting companies that increased their exports by 25% in 2016 compared to 2015.

The Export Development Fund will oversee the programme’s operation from April 2016 to March 2017, during which export companies have to submit documents and bills every six months to validate their profits.

Egypt also depends on the Suez Canal as a major source of foreign currency and dollars, as well as remittances from Egyptians abroad, and Egyptian exports and tourism revenues.

The current regime in Egypt is depending on the expected revenues of the New Suez Canal, which was inaugurated in August. Al-Sisi’s government aspires to have the new canal aid the national economy, as the Suez Canal Authority expects revenues to reach up to $13.2bn by 2023, which is over two times more than the revenue recorded in 2014, which was $5.4bn.

The New Suez Canal was established to allow ships to transit in both directions, without stopping in the canal’s waiting areas, thus reducing the transit time.

However, traffic data from the authority suggests that there is a decline. In 2014, the annual growth of the number of vessels increased by 3.33% and payloads by 5.16%. However the annual growth rate fell in 2015 by 1.95% in terms of number of ships, while cargo growth dropped by 3.73%.

With the revenue levels of tourism, the Suez Canal and Egyptian exports declining, Egypt will still find it difficult to increase its foreign reserves, currently standing at $16.5bn, $20bn less than the level of 2010. Thus, the dollar crisis is not expected to break soon.

GlaxoSmithKline pumps EGP 400m into Egypt until 2017: Minister of Investment