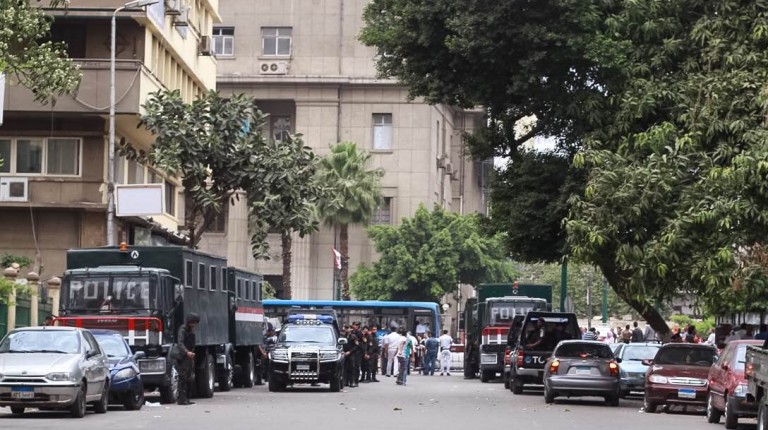 Human Rights Watch (HRW) issued a report Wednesday on the police forces’ suppression of Monday’s demonstrations that protested against the maritime demarcation decision that transferred Egyptian sovereignty over Sanafir and Tiran islands to Saudi Arabia.

“Egyptian security forces arrested at least 382 people in the days leading up to and during the dispersal of mostly peaceful protests on 25 April 2016. The protests followed a rare mass demonstration against President Abdel Fattah Al-Sisi in Cairo on 15 April,” the statement read.

The rights watchdog indicated that police forces made warrantless inspections of bystanders and public transportation passengers’ mobile phones and arrested them if they found anti-government images or material.

According to the Front for the Defence of Egyptian Protestors, police arrested at least 286 people on 25 April, including lawyers and activists. The majority of the arrests, which spanned seven governorates, occurred in the greater Cairo area, the report clarified.

The organisation further highlighted the Interior Ministry’s prevention of lawyers from attending investigations with those who were detained during the protests.

Police forces fired teargas at lawyers waiting outside the station at about 10 pm on Monday, after the station chief yelled at them to leave, the report said, citing testimony from a lawyer.

The HRW report said prosecutors in multiple governorates, including Cairo and Alexandria, opened at least 11 investigations that could result in charges being levelled against those arrested in the pre-25 April sweep, according to testimonies form the Heliopolis Center for Political Development and Human Rights.

Charges include incitement to use force to overturn the government, incitement to attack police stations, membership in a terrorist group, promoting terrorist crimes and thoughts through the internet, publishing false news through social media to disrupt stability and security, and incitement to demonstrate without permission.

The HRW report highlighted testimonies from detainees in the ‘Friday of Land’ protest who were later released, in which they claimed they were suffering from absence of food and water in custody that was deliberately withheld by Qasr Al-Nil police station officers.

Amnesty International issued a similar report on Tuesday, criticising the recent crackdown by the current regime against protestors.

It urged Egyptian authorities to respect the rights to freedom of assembly and freedom of expression, and demanded the prompt release to those who were arrested for protesting peacefully.

Amnesty said Egypt’s current Protest Law “prohibits protesters from staging demonstrations without the consent of the authorities”, resulting in the dispersal of any opposition protests, while conversely facilitating protests by supporters of President Abdel Fattah Al-Sisi.

The organisation levelled sharp criticism and expressed concerns over the “draconian” counter-terrorism law, arguing that the “vague and overly broad definition of ‘terrorist act’ included in the law allows the authorities to suppress any form of peaceful dissent”.