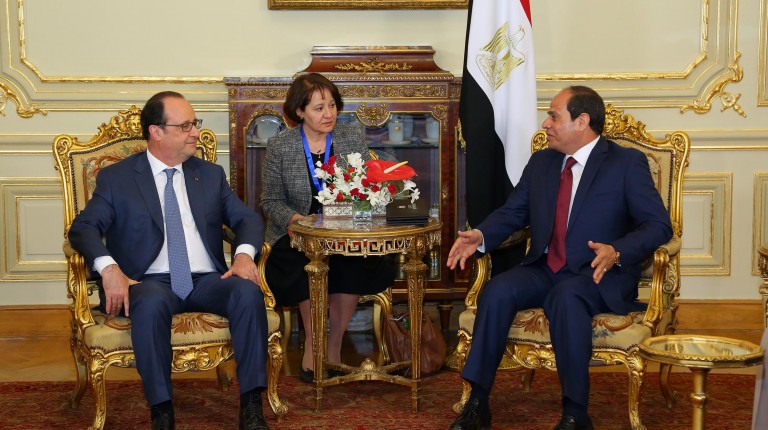 Egyptian president Abdel Fattah Al-Sisi said Egypt is subject to attempts to isolate it from its European neighbours, during a press conference with his French counterpart François Hollande Sunday.

Al-Sisi added that “Egypt is a modern civil state aiming for a wider definition of human rights and freedom. We are committed to being a state of law that respects the freedom of its citizens”.

The Egyptian president said that he discussed bilateral relations with his French counterpart, and both sides confirmed their commitment to boosting cooperation between the two countries.

Al-Sisi’s statements come amid Hollande’s two-day visit to Cairo, which began on Sunday.

The duo also discussed Egypt’s efforts to encourage tourism, adding that Egypt is ready to receive security delegations from France, the UK, and Russia to review security measures and ensure the safety of their citizens.

The French president said relations between Egypt and France are historic, and any current problems are “individual cases” which will be discussed.

Hollande’s visit comes amid heightened tensions between Egypt and France’s neighbour Italy over the murder of Italian PhD candidate Giulio Regeni, whose body was found in February with signs of torture.

Al-Sisi and Hollande addressed the situation in a number of Middle East conflict zones, such as Palestine, wherein they agreed to support negotiations towards a two-state solution.

Regarding the case of Guilio Regeni, Al-Sisi said Egypt is ready to cooperate with full transparency with the Italian investigators.

Al- Sisi claimed Egypt is targeted by attempts to destroy state institutions and to isolate it from its European neighbours by creating a negative image of Egypt.

“Our relations with France and Italy are unique and we will never forget the Italian and French support for Egypt in its time of need,” he added.