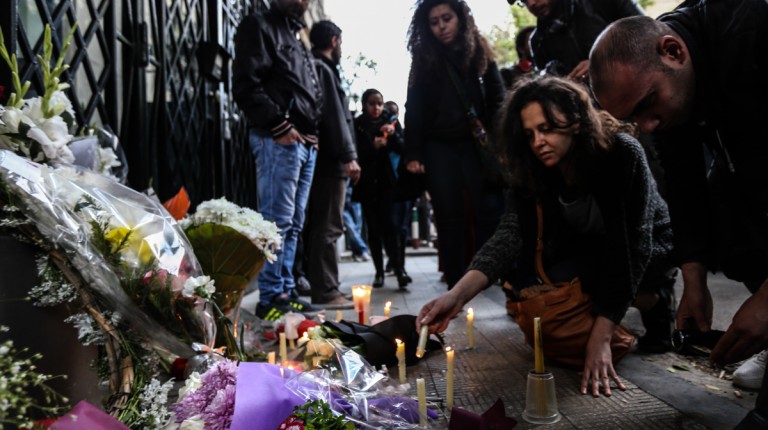 Giulio Regeni’s family will commemorate his death in a sit-in in front of the Egyptian Embassy in Rome Thursday, marking one month since the disappearance of the Italian student in Cairo.

The body of Cambridge PhD student Regeni was found on 3 February, dumped on Cairo-Alexandria desert highway and showing signs of torture. He was reported missing on 25 January 2016, a day that saw widespread security presence.

Amnesty International Italy stated it joined the sit-in organised by Antigone and the Italian Coalition for Civil Rights and Freedoms and that writer Erri De Luca and artist Lorenzo Terranera will display a 10m blank canvas to be filled with colours and messages for Regeni’s family.

The Egyptian Ministry of Interior has not yet issued any results regarding ongoing investigations after being accused locally and internationally of ”kidnapping Regeni and torturing him to death”.

The ministry said in a statement Wednesday that according to what has been revealed in Regeni’s case, the Italian student had a wide network of contacts “despite only spending six months in Egypt”. This suggested personal motives for the crime possibly committed by “any of his many acquaintances, in vengeance”.

The ministry repeated its condemnation of “foreign media reports publishing rumours and inaccurate information without evidence”, in reference to allegations that Regeni was the victim of security force brutality.

A team of Italian investigators have been working with Egyptian authorities on the case since 5 February. The Egyptian ministry said it interrogated many citizens who knew Regeni.

The Egyptian department of forensic medicine announced the initial autopsy results, reporting that the main cause of death was blunt force trauma delivered by a sharp object to the back of the head that caused a cranial fracture and severe intracranial hemorrhaging.

The ministry hwoever impugned the veracity of reports. Egyptian Ambassador to Italy Amr Helmy reiterated that Egyptian security agencies had no hand in the death of Regeni. “Regeni was never in police custody and we are not so ‘naive’ to kill a young Italian and throw away his body on the day of Minister [Federica] Guidi’s visit to Cairo,” Helmy told the Italian news agency ANSA.

A campaign launched by Amnesty International Italy called “Truth for Julius Regeni”, aims to follow up on the case and ensure that the murder of Regeni “does not end up being forgotten or be listed among the many ‘ongoing investigations’, or worse, be forgotten by an ‘official version’ from the government in Cairo”.