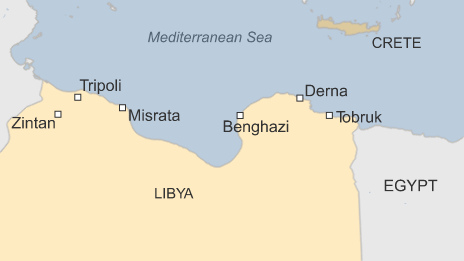 Participants from the Tobruk-based internationally recognised government and from municipalities in Tripoli and the main-hub of ‘Libya Dawn’ fighters, Misrata, signed an initial agreement on Saturday to form a government of national accord for one year, according to the UN Support Mission in Libya (UNSMIL).

Key representatives from the Islamist-run Tripoli-based General National Congress (GNC) were absent for the agreement, which is still to be finally negotiated. Rivalling parties however reached an agreement in Skhirat, Morocco, to outline a unity government, but certain details and the annexes remain for final negotiations.

The UN Secretary General’s Special Envoy to Libya, Bernardino Leon, hailed the agreement as being “one but a very important step on the road to peace” at the signing ceremony, stating that “the door remains open for those who chose not to be here today”.

Further, the international community applauded the agreement. The ambassadors of Canada, the EU, France, Germany, Italy, Morocco, Portugal, Russia, Spain, Turkey, the UK and the US congratulated “the delegates who have demonstrated their responsibility, leadership and courage in this crucial moment”.

A statement by the Egyptian Foreign Ministry on Sunday also welcomed the signing of the agreement, announcing it would go on supporting “the aspirations of the Libyan people to live in a stable, democratic and pluralistic state”, also calling upon the parties to renounce violence and “work for the success of a political agreement on the ground”.

The annexes of the agreement are still to be negotiated, allowing for the possibility that GNC delegates will stir the draft in a direction more comfortable for them. GNC delegate Mowafaq Hawas complained to Reuters news agency that Tripoli representatives did not “really understand why they are rushing to sign before all the parties agree”.

Nuri Abu Sahmain, GNC spokesman, also voiced his concerns about the way negotiations were held in an official statement on Saturday, complaining that Leon and his team failed to incorporate proposals by the GNC. Nonetheless, he “renewed the GNC’s commitment to the dialogue as a way out of Libya’s crisis”.

The signed draft is based on a proposal by UN envoy Leon in early June, which was at first rejected by the Tobruk-government of Abdullah Al-Thinni. After complaints, the agreement was modified to include fewer GNC members in the new State Council and it has been downgraded to a consultative body.

Another issue of concern was the inclusion of the Libyan National Army (LNA), headed by Khalifa Haftar, in the draft. Haftar was one of the key figures who took up arms against the Islamist coup in Tripoli that led to the division of the country.

The agreement aims at establishing a government of national accord for one year with the possibility of extending it for a further year. The legislative body is to be made up by the House of Representatives from Tobruk, while the ministerial cabinet headed by the prime minister and two deputies will wield executive powers.

After Leon headed dozens of negotiation rounds, mainly in North Africa and Europe, the signing of a first agreement could in fact pose a breakthrough in the negotiations that have been dragging on longer than planned. Additional pressure was put on the delegates by the deteriorating security situation in the country with “Islamic State” militants increasingly exploiting the vacuum left by the rivalling factions.

Libya is caught in a civil war since a broad alliance of Islamist militias, called Libya Dawn, took over the capital Tripoli, reinstated the old General National Congress and forced the elected parliament to flee along with its government to the eastern Libyan city of Beyda near Tobruk.

The urgency for a solution is demonstrated by recent events in the eastern city of Benghazi near Tobruk, where clashes in the past few days between radical Islamists and government forces killed 19 people and injured 80 others, according to several media outlets. In response, Al-Thinni’s government accused “Islamic State” of staging the recent attacks.

Meanwhile, calls for lifting a UN Security Council arms embargo against Libya, in place since 2011, are on the rise. The calls claim that arms and ammunition are needed in order for the LNA to efficiently counter the threat of terrorism. UN officials though are wary about lifting the embargo, unwilling to further fuel the ongoing clashes.