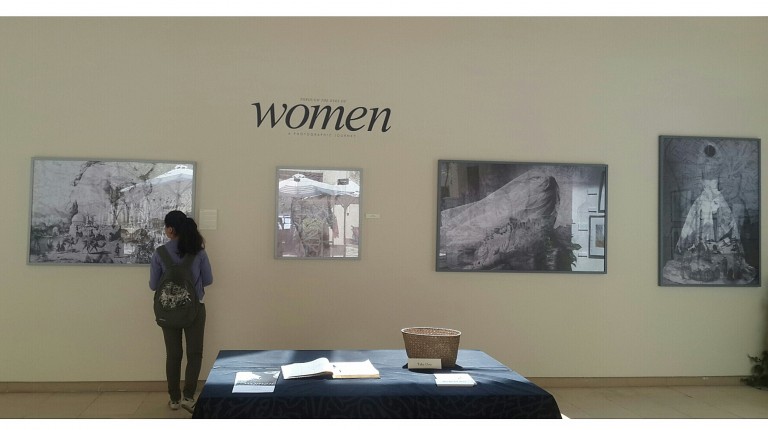 Spending a day as a woman will surely make you see a different world, where things tend to have more details as genuine beauty lies in everything around us. Several scientific studies prove this assumption, as some experts claim that females see more colours and shades while others swear by women’s higher attention to detail.

Shems Friedlander, a Photography Professor at the American University in Cairo (AUC), decided to test the previous assumption through a new method, an artistic method.

After spending years in the world of photography, Friedlander came to believe that women do see the world differently. Better or worse with more details or less, Friedlander preferred to leave the final judgment to the audience. Therefore, the professor joined 17 female photographers and their most iconic works under one roof.

The “photographic journey”, as Friedlander chose to describe it, accommodates the international month of women, March. Yet, unlike the expected, the photographs do not just discuss women. On contrary, they discuss all angels and sides of life only through a female’s perspective.

The selection of artists aimed to provide a full and complete image of a woman’s world.

“This is an exhibition seen from the eyes of women,” Bahgat elaborated. “These women are from different ages, some of them are students while others have already died. They are also from different countries; Egypt, USA, Turkey and Czech Republic.”

Merna El-Hennawy, Zeina Zahra and Haya Salhin were undergraduate students who amazed Friedlander with their projects last semester. Others are well-established photographers today, while few left the world after creating their photographic legacy.

This wide range of talent offers a near-inclusive idea of a woman’s world. Each photographer contributed with a mini-series of three to five photos that captures a story. Even though each artist focused on a whole different topic, together the 17 create one full image.

American photographer H. Meral Friedlander used her IPhone to capture her own world between the skyscrapers of New York, Central Park and Harvard Square. Meanwhile, Ann Parker exhibited her fascination with El-Hajj’s paintings that decorate the houses of the pilgrims on the other side of the world, in Egypt.

Marwa Adel, one of Egypt’s most prominent current photographers, showed her surrealistic take on the world, especially women’s struggles and journeys. Adel uses a digital photographic feature that allows her to centre women as her permanent topic.

Nagla Samir, the exhibition’s rebel, displayed few photographs that manifest her rejection of all norms that regard women as identical. “Fool’s Paradise” is Samir’s symbolic series, which show a group of headless mannequins being lead blindly.

Meanwhile, Sara Bayoumi’s “Identity” fights one of today’s most prejudice stereotypes. While Islamophobia is a global phenomenon today, Bayoumi’s photographic series aims to prove that humans are always a range of several goals and beliefs other than religion.

Her work showcases several young Muslims who hold on to the Quran and traditional garments, while participating in today’s modern life.

On the other hand, pioneering photojournalist Dorothea Lange documented the tough life of women during a different era. Lange’s work narrates the average life of workers during the great depression. For this exhibition, Professor Friedlander chose the photographs that tackled women of this era in particular.

Marie Cosindas is yet another pioneer. Cosindas was a master of Polaroid photography especially that she was one of the very first photographers to dive in this world and experiment with black and white photography versus the colouring techniques back then.

“This exhibition aims to help female photographers,” Bahgat added. “It is publicity for women; it got a lot of coverage in the media which will make it reach a lot of people.”