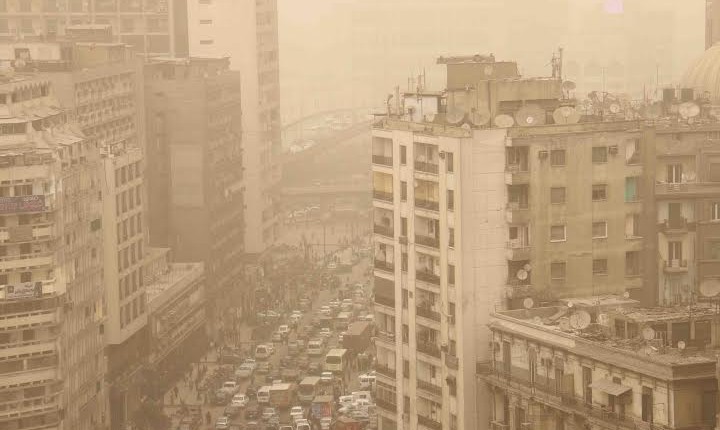 Waking up to rattling windows and overcast skies is a sure sign that a rainstorm is fast approaching. In Egypt, however, it’s a different story—a sandy one. Sandstorms come to pass in Egypt, but they’re not exactly a common occurrence. In fact, in Cairo, one will often forget that outside the city lie hundreds of kilometers of desert in every direction.

When the wind picks up, the sand blows over and leaves everything covered in yellowish soot. The storm we’re experiencing, which started on Tuesday, is expected to blow over on Thursday, meteorologist sites reported.

On Tuesday, the storm was so severe that it managed to briefly delay the arrival of flights to Cairo’s International Airport, Yahoo News reported. Four flights were diverted to another airport, while a fifth was redirected to land in Amman, Jordan.

The posters of Russian President Vladimir Putin, which adorned the 6th of October bridge, for his latest Cairo visit have suffered severe damage and were removed because they kept falling on cars and people.

Plenty of people have complained that, even after closing their windows, sand and dust still manage to slip inside, most likely from air conditioning units. Parked cars look like they have been racing in mud with specks of sand splattered on their windshields.

The sandstorm isn’t just affecting Cairo. Cities all over the nation have felt the brunt of this storm, which has even extended out to the Sinai. Crashing waves in the resort town of Dahab have reached heights of 4-5 meters says Nekita Lee, a Latvian who has been living in the town for the past five years.

The sandstorm has turned the sky yellow and blotted out the sun, limiting visibility. Anyone driving should proceed with caution.