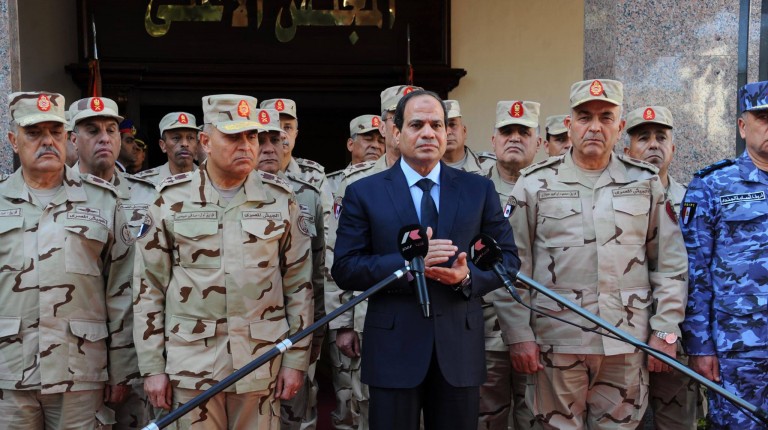 President Abdel Fattah Al-Sisi, head of the Supreme Council of Armed Forces (SCAF), issued a decree on to form a new joint military command to fight terrorism east of the Suez Canal.

The decree was issued during a SCAF meeting that discussed the details of the deadly attacks in North Sinai on Thursday that left at least 30 dead of both security personnel and civilians.

‘State of Sinai’ militant group, formerly known as ‘Ansar Beit Al-Maqdis’, claimed responsibility for the attacks, which targeted military and interior ministry facilities in Al-Arish, Sheikh Zuweid and Rafah, in a detailed statement on Friday.

The group’s statement said “hundreds” were killed in the attacks, a claim refuted by a representative from the military spokesman’s press office who said “the numbers will not be announced”. However, he said the figures reported by media outlets, between 20 and 30, are closer to actual figures.

The security analyst said the joint command will be able to take formidable decisions in less time and with more concentration, instead of having the 3rd Field Army, police forces and intelligence all operating separately to counter the militant insurgency in Sinai.

Moreover, the decree promoted General Osama Askar to Lieutenant General and appointed him commander of the new military body, according to a statement by military spokesman Mohamed Samir.

Hefzi said the field experience and qualifications of Askar, as the commander of the 3rd Field Army, was the reason he was appointed to the new position.

The new anti-terrorism command will be the first of its kind in the region, according to state-run Al-Ahram newspaper.