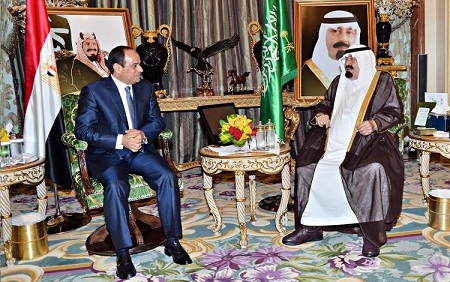 President Abdel Fattah Al-Sisi returned to Cairo on Monday following a one day visit to Saudi Arabia during which he discussed ways of strengthening ties with the Gulf nation. Al-Sisi will stay briefly in Cairo before travelling to Russia on Tuesday.

Al-Sisi met with King Abdullah bin Abdulaziz Al-Saud in his Jeddah palace on Sunday evening. The pair discussed “events taking place in the Islamic, Arab and international arenas” with  particular focus on the current situation in the Gaza Strip, said the Egyptian State Information Service (SIS).

King Abdullah bestowed upon Al-Sisi the Medal of King Abdulaziz, which is awarded to “the leaders of the world’s brotherly and friendly countries”, according to the SIS.

Al-Sisi and King Abdullah met privately following the group meeting, which was followed by a dinner in the Egyptian president’s honour.

Saudi Arabia has been a strong backer of Egypt since the ouster of former President Mohamed Morsi in July 2013. The Gulf kingdom has helped to prop up Egypt’s ailing economy through $5bn in grants, deposits and petroleum products.