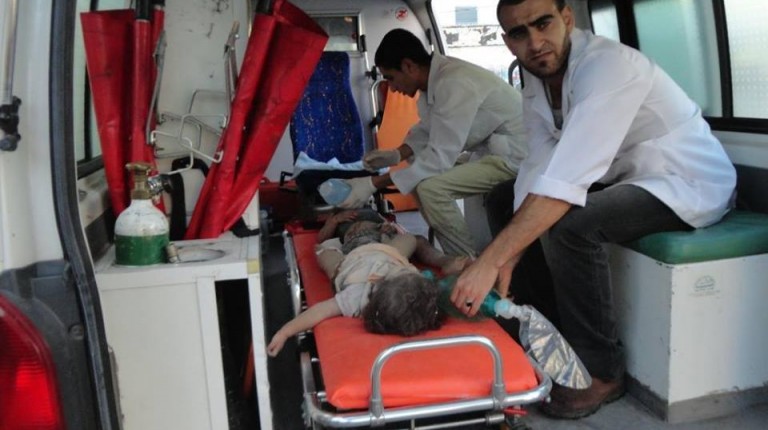 The Palestinian Ministry of Interior say that Israel violated a seven-hour humanitarian ceasefire after at least 30 were injured in the shelling of a house in a refugee camp on the western coast of Gaza.

The Israel Defense Forces (IDF) announced on Monday the seven-hour “temporary humanitarian window”, which began at 10am in the Gaza Strip.

The IDF said on Monday morning the “humanitarian window will not apply to the areas in which IDF soldiers are currently operating”, adding that Israeli forces would “respond to any attempt to exploit this window to harm Israeli civilians and IDF soldiers”. The IDF says its forces aim to destroy tunnels that penetrate Israeli territory.

The IDF said later on Monday that it was looking into the reports of the shelling.

Talks continued in Cairo on Monday after Palestinian representatives presented their conditions for a ceasefire with Israel “with one voice” on Sunday during the first round of meetings in Cairo aiming to bring an end to the conflict in Gaza, which has claimed over 1,800 lives.

The cross-faction Palestinian delegation presented Egyptian officials with “unified Palestinian position on a ceasefire in Gaza” to be handed to the Israeli side, said Maher Taher, a Palestinian Authority representative part of the delegation, in a statement on Sunday evening. Hamas representative Ezzat Rishq shared this sentiment adding that there would be a meeting with the head of Egyptian intelligence chief, Farid Al-Tohamy on Monday.

The conditions put forward by the Palestinians include Hamas’ main demands of the full withdrawal of Israeli troops and lifting the air, land and sea blockade on Gaza that has been in place since 2007. Other conditions include the extension of Gaza’s maritime fishing zone, the release of prisoners and reconstruction of the strip funded by an international donor conference under the supervision of the national unity government formed earlier this year, said Taher.

Rishq said: “We want the Egyptian officials carry the demands of the Palestinian people and put pressure on the Israeli enemy to surrender to these demands.”

Paul Hirschson, a spokesperson for the Israeli Foreign Ministry said on Monday the talks in Cairo have “nothing to do with us”.

He continued: “we were hoping at this point to be at the end of a 72-hour ceasefire and negotiations” referring to the United Nations and United States sponsored ceasefire that fell apart last Friday. “Hamas has made itself clear several times now by breaking ceasefire agreements. We are left with no choice”, said Hirschson.

Egypt was set to to take part in a meeting of the Non-Aligned Movement in Tehran on Monday to discuss the situation in Gaza and efforts to end the violence.

While talks took place in Cairo on Sunday the fighting continued in Gaza resulting in the shelling of a United Nations school, the sixth such incident since the conflict began, prompting widespread condemnation. UN Secretary General Ban Ki Moon described the incident as a “moral outrage and a criminal act”. The United States State Department Spokeswoman Jen Psaki said: “The United States is appalled by today’s disgraceful shelling” and called for a full investigation into the incident”. Psaki also stressed: “The suspicion that militants are operating nearby does not justify strikes that put at risk the lives of so many innocent civilians.”