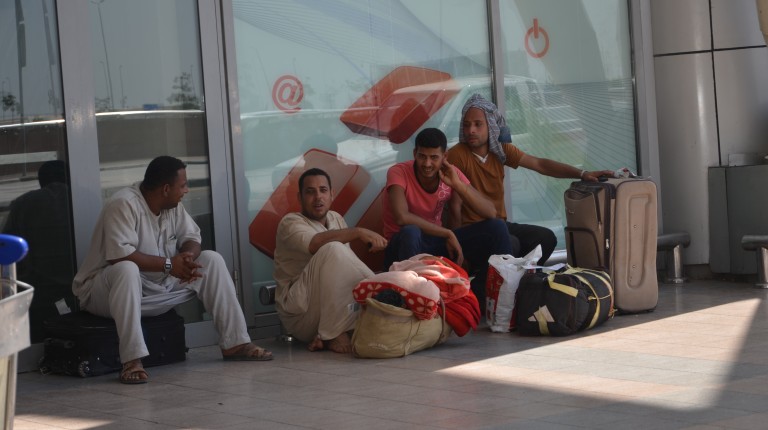 The newly-formed National Committee agreed to increase the number of consulate members at the Libyan border with Tunisia to help with evacuating Egyptian nationals stuck in Libya.

The National Committee was formed by Prime Minister Ibrahim Mehleb to look into the conditions of Egyptians residing in Libya, consisting of officials from the foreign, defence, interior, transportation, civil aviation and health ministries, as well as Egypt’s ambassador to Libya.

During its first meeting on Friday, the National Committee also agreed to provide Egyptian nationals at the Libyan border with Tunisia with health care and medicines as well as food, in cooperation with the Egyptian health ministry and Red Crescent.

The committee, which is also intensifying its communication with the Tunisian authorities to facilitate the evacuation of Egyptian nationals, announced it will remain in permanent session to oversee the evacuation process.

The Libyan government formed a crisis committee to look into the situation of Egyptian nationals stuck at the borders with Tunisia, said Mohammed Fayez Jibril, Libya’s ambassador to Egypt. Jibril told to the Daily News Egypt that the Libyan government has called on its Tunisian counterpart to open the borders for Egyptian workers in Libya to facilitate their flight back to Egypt.

Around 1.6 million Egyptians reside in Libya, a large number of them include workers, Jibril said.

The foreign ministry called on all Egyptian nationals residing in Libya to evacuate immediately to safer areas within the country and steer clear of those where clashes are held. It also renewed its travel warning to Libya.

Foreign Minister Sameh Shoukry said in a ministerial statement that the National Committee has “weighed the situation on the ground”, especially on the Libyan borders with Tunisia. The committee supplied the Tunisian authorities with a list of airplanes that will be sent to Tunisia’s Djerba airport to evacuate Egyptians fleeing the Libyan unrest.

At least 1,170 Egyptians have been evacuated through an emergency airlift set up between the Djerba airport and the Cairo international airport, active since Thursday.

Minister of Civil Aviation Hossam Kamal said Egyptair, Egypt’s national carrier, has allocated four airplanes to transport Egyptians fleeing the Libyan unrest from the Djerba airport. Kamal said EgyptAir is aiming to fly 1,950 Egyptians back to Egypt, in coordination with the foreign ministry. He stressed that passengers are being transported free of charge.

Al-Dostour Party called on the president, the foreign ministry and all other concerned authorities to increase the number of daily flights evacuating Egyptian nationals from Libya. The party described the evacuation measures adopted by the Egyptian authorities as “slow and insufficient compared to the amount of suffering Egyptian citizens have lived through during the past days”.

At least 23 Egyptians were killed in Libya last week as a result of the shelling of a Tripoli home housing Egyptian workers. The shelling came amid intensified fighting between Libya’s rival militias, which has thus far left at least 102 killed in the capital and 179 killed nationwide, according to the Libyan health ministry’s latest count on Wednesday.

Heavy fighting has dominated Tripoli and Benghazi for the past three weeks, with at least 77 killed in clashes between Islamist militias and Libyan Special Forces in the eastern city of Benghazi, according to the Libyan health ministry.

A standoff between rival militias at the Tripoli Airport led to its closure since 13 July and prompted the evacuation of the United Nation’s staff from the country shortly afterwards.

Violence has repeatedly surged and died down in Libya after the overthrow of former president Muammar Gaddafi, who was killed by militants in October 2011. However, the violence drastically escalated in 2014 when retired General Khalifa Haftar launched a campaign in May to root out “terrorism” in the coastal city of Benghazi.

The authorities have denounced his actions, labelling him an outlaw.

Militias from the city of Zintan loyal to Haftar have gained control over the Tripoli international airport, prompting heavy fighting with Islamist brigades.

The fighting has negatively affected trade exchange between Libya and Egypt.