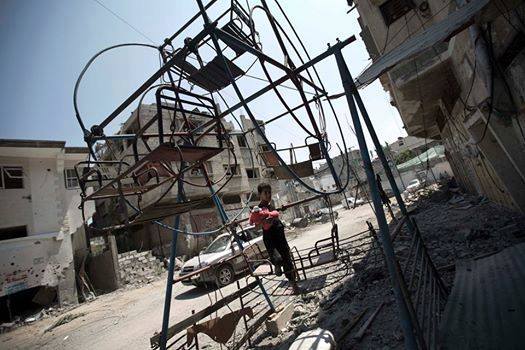 A strike at a children’s park in Al-Shati camp in Gaza killed 10 children celebrating the first day of the Muslim Eid Al-Fitr holiday on Monday.

The strike was shortly followed by another one hitting the external clinics of Al-Shifa hospital in western Gaza.

The IDF said that “Palestinian terrorists” fire from civilian areas in Gaza “hit[ing] their own people”, adding over 200 rockets fired from Gaza have hit the besieged strip itself since the start of the Israeli operation “Protective Edge” on 8 July.

The Ministry of Interior in the Gaza Strip denied the IDF allegations. It accused the “Israeli occupation forces” of targeting the Al-Shati camp and Al-Shifa hospital, describing Israeli’s allegations of Hamas’ involvement in the attacks as “false allegations to evade responsibility for these crimes”.

The ministry claimed that security forces from the explosives department seized the remains of Israeli shells on both targets.

The Qassam Brigade, Hamas’ military wing, said on Monday it killed six Israeli soldiers. The brigade announced on its Twitter account it is carrying out attacks on Israeli targets to avenge for what it described as the “children’s massacre”, in reference to the shelling of the Al-Shati camp.

The latest round of violence follows a short-lived quiet that took over the besieged strip on the eve of Eid.

In an emergency session held Monday after midnight, the United Nations’ Security Council called for an “immediate and unconditional” ceasefire to allow humanitarian aid into Gaza. The council urged the warring parties to agree to a long-term ceasefire based on an initiative presented by Egypt almost two weeks ago.

The Egyptian initiative has so far failed to come into effect despite efforts to enforce it by United States Secretary of State John Kerry and UN Secretary General Ban Ki-moon, who both visited the Egyptian capital twice last week.

The meeting failed to enforce the humanitarian ceasefire, leaving the situation congested in the strip which has thus far seen over 1030 Palestinians killed, including 246 children and over 6200 injured, according to health ministry sources. Israeli death toll stands at 46, including three civilians.

The IDF launched a ground invasion of the Gaza Strip in the night of 17 July, almost 10 days after the start of its offensive on the strip. The ground invasion shortly followed an official rejection by Hamas of the Egypt-sponsored ceasefire agreement.

Before a Friday joint press conference held by Kerry and Ban the UN chief in Cairo, Israeli media reports circulated saying that Israel’s security cabinet had rejected the most recent ceasefire proposal. Kerry dismissed these reports, saying: “They may have rejected some language” and that there was no formal proposal presented.