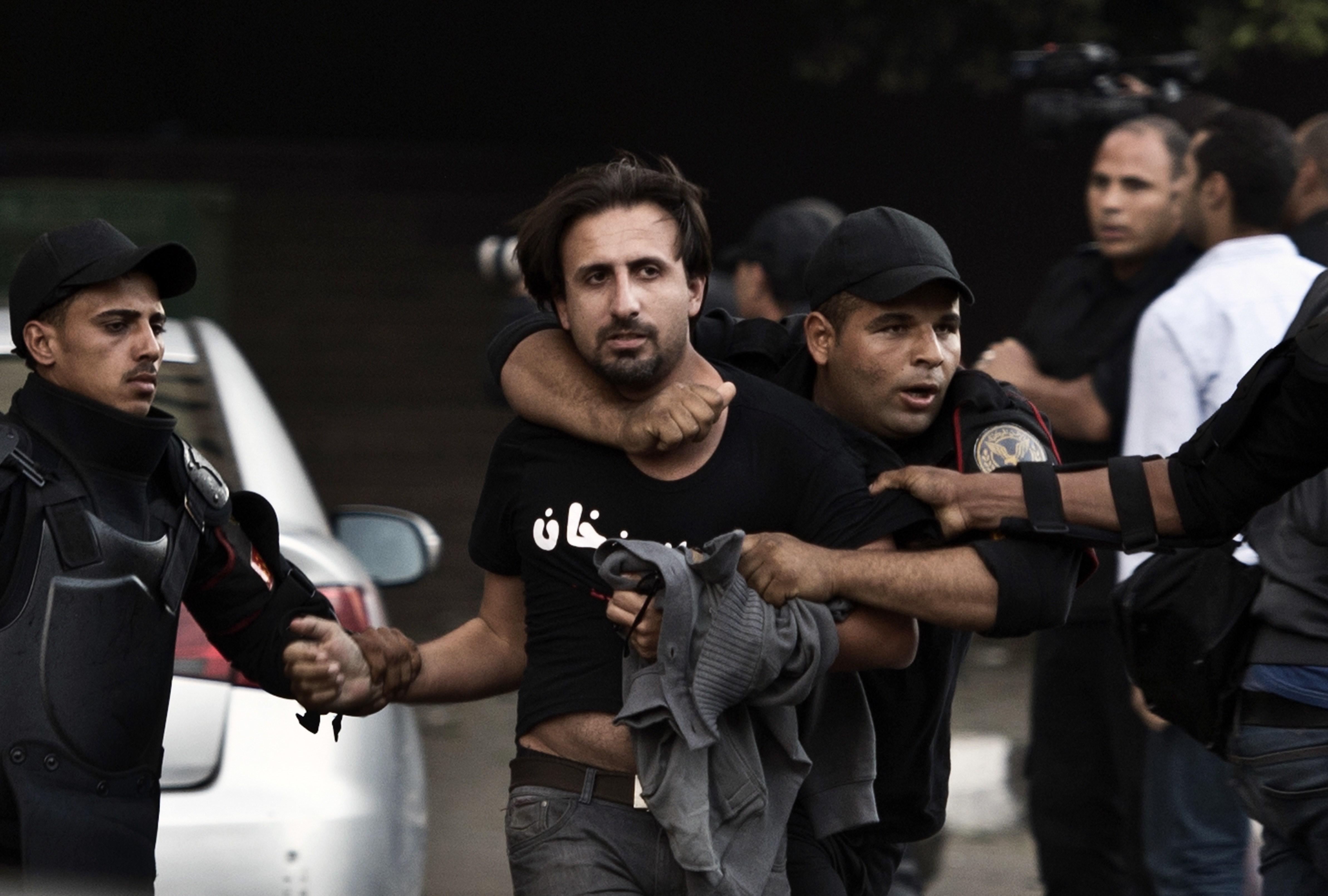 Tuesday’s forcible dispersal of protests at the Shura Council and the arrests that followed represent “nothing but a continuation of an oppressive state that does not acknowledge human rights or liberties,” Misr Al-Qaweya (Strong Egypt) Party said in a Wednesday statement.

The statement came amid a number of denouncements from various political groups regarding the Ministry of Interior’s handling of the protests.

The party affirmed that it opposes all the laws and protocols that are created by a state that takes away human rights and liberties. The party called on Egyptians to peacefully continue seeking the demands of the revolution by unifying under the three basic demands of “bread, liberty and social justice.”

The Egyptian Center for Economic and Social Rights (ECESR) reported on its website on Wednesday the detainment of protesters in other governorates, including four students in Minya belonging to 6 April Youth Movement, a high board member from the Egyptian Social Democratic Party in Asuit, and four protesters in Aswan.

ECESR also called on interim President Adly Mansour to immediately halt the implementation of the Protest Law, postpone any similar law until the new parliament is elected, and to release all detainees.

Al-Dostour Party made a statement denouncing “the use of violence and the arbitrary arrests against peaceful protesters”, which included several members of the party, and called for their immediate release. The party asserted in its statement that it has refused the Protest Law since it was drafted last month.

Al-Dostour Party called for an apology from the government, which it said “needs to broaden its public support” and for the Minister of Interior to be held accountable for “the unnecessary violent measures” taken in the protest.

The Anti-Coup Alliance in its Tuesday statement expressed its support for the protesters who were attacked at the Shura Council and called for a unified front to oppose what they have called “authorities of oppression”.

The alliance said “the new wave of violence against protesters is a means to the downfall of the coup.” The statement added that the attacks on peaceful protesters by what they called “MOI militias” are a repetition to the attacks against “protesters against the coup.”

The Egyptian Social Democratic Party expressed its disappointment in the performance of the MOI, describing their actions as “vicious”. The party asserted that it had not supported the post 3 July road map “to replace Brotherhood fascism with a new form of fascism” that would hold back the revolution from achieving its goals, “or even make it take a step backwards.”

The party said it opposes military trials for civilians, any calls for limiting liberties under the argument of the Sharia (Islamic jurisprudence), laws limiting freedom of expression, police intervention in university campuses and any moves that would represent “stabs of treason to the ambitious dreams of the revolution.”

The party added that it will support the protests, calling for the abolishment of the Protest Law and will collaborate with all democratic and revolutionary fronts to stop that law.

They also called on their party members in the Constituent Assembly to halt their activities until the detainees are released.

The Revolutionary Front, meanwhile, called for a protest in Talaat Harb Square on Wednesday afternoon to demand a ban on military trials for civilians, the release of the Shura detainees, and the abolishment of the Protest Law.

Meanwhile the front’s student’s office called for student protests in Egyptian universities to demand the release of the all detained students and “oppose the return of police violence.”

The group announced on its official page that the front’s student protests would join those of its main organisation in Talaat Harb Square.