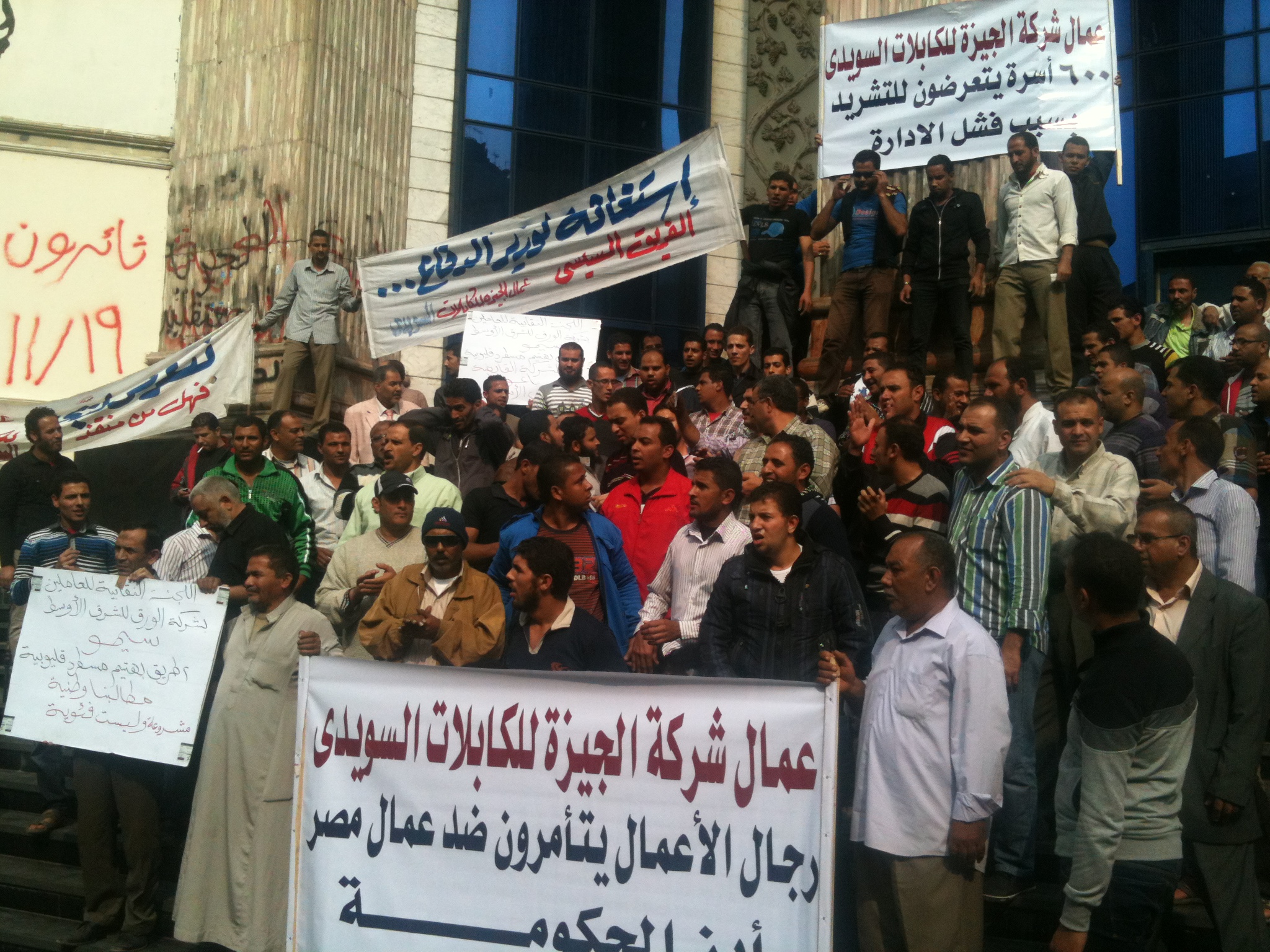 Dozens of workers protested on Wednesday at the Press Syndicate before and after a presser organised by its Liberties Committee to discuss violations against workers at various factories.

The problems revolved largely around unfair dismissal, but workers also voiced opposition to “the capitalists’ indifference” over health insurance, the forced shutdowns of factories, deprivation of financial rights and execution of court orders related to the return of illegally privatised factories to state ownership.

Mohamed Abdul Quddus, the chairman of the syndicate’s liberties committee, suggested that the workers’ struggle should take three paths: protesting, suing factory owners and the Ministry of Manpower for its deficiencies, and informing the National Council for Human Rights of the violations.

Abdul Quddus assured the workers that the committee would “be by [the workers’] side until reclaiming [their] rights”.

Hisham Fouad from the Revolutionary Socialists Movement meanwhile added, “We are all in the same boat; we are here to make your voice heard by the officials.”

As common demands Fouad cited: the application of the minimum and maximum wage, the 50% quota for farmers and labourers in the Constituent Assembly and improved labour laws.

The spokesman for the workers at Crystal Asfour factory, Mohamed Ismail, said the workers have suffered health complications due to the insufficient safety measures in the factory over the past six years.

Hisham Al-Banna, spokesman for Samanoud textiles workers accused the Central Security Forces of attacking their strike with “tear gas and rubber bullets as if we were thugs.” The striking workers were demanding their salaries, delayed for three months.

Mohamed Gad, spokesman for Pharcor medicine workers, meanwhile called the “the forced shutdown” of the Pharcor factory “a conspiracy against national security”. Gad elaborated that Pharcor owns 17% of the Egyptian medicine market share and its shutdown has caused around “300 medications” to go missing from the market.

Haitham Mohamadein, the prominent leader of the Revolutionary Socialists and one of the workers’ lawyers, said, “I suggested an article to a member of the Constituent Assembly that would ban factory owners from performing forced shutdowns, but the member said that was absolutely impossible.”

Mohamadein attributed this response to the capitalist nature of the assembly and suggested that worker-run factories should be the goal of all Egyptian workers who face forced shutdowns. “The workers need a unified party that would compete in parliament and defend their rights,” he added.

Fatma Ramadan, member of the Executive Committee of the Egyptian Federation of Independent Trade Unions, meanwhile mentioned that the proposed Protest Law is unfair to workers as it will ban labour strikes, leaving them with no outlet to voice their grievances.