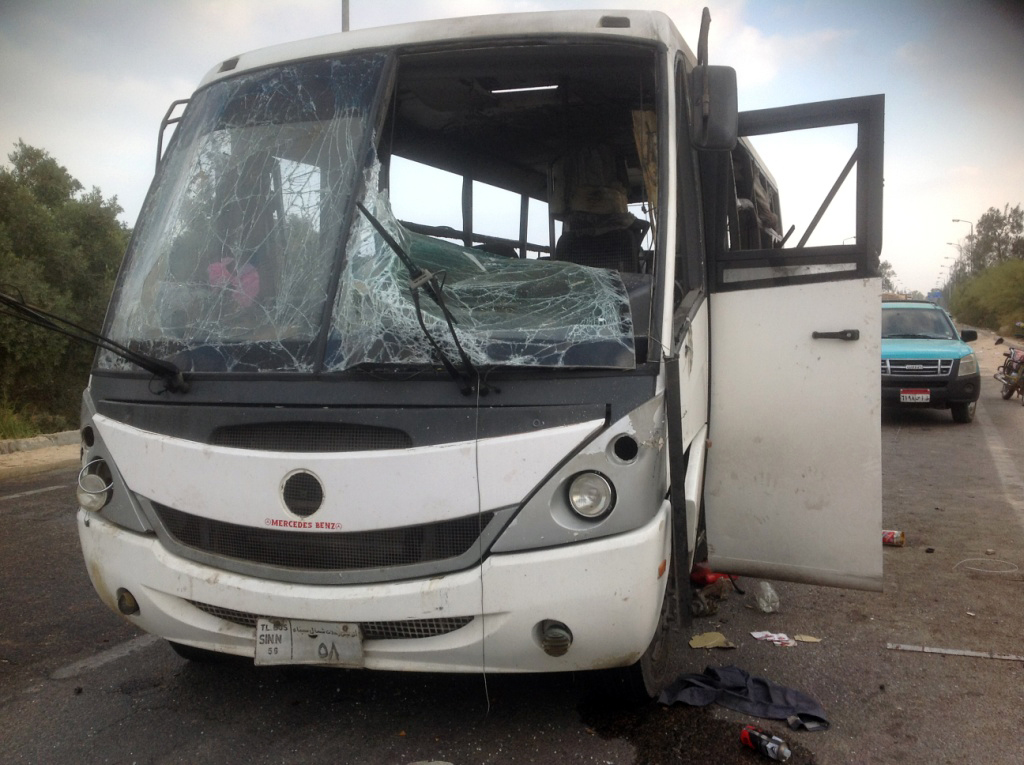 Three people died and 15 were injured when a bus was shelled in North Sinai in the early hours of Monday.

The bus was carrying workers from a cement factory in Central Sinai when a group of armed assailants fired an RPG. Eyewitnesses reported the militants had originally targeted either Arish Airport or an armoured vehicle stationed near the airport.

Al-Arish residents rushed to Arish General Hospital to donate blood as several cases were severely injured and the death toll is expected to rise, according to Nasser Al-Azzazy, the Daily News Egypt correspondent in Sinai.

The armed forces expressed “deep condolences” to victims’ families in a statement released by the army spokesman Colonel Ahmed Ali.

Vice Chairman of Freedom and Justice Party Essam Al-Erian said that violence in Sinai was carried out by intelligence agencies to distort the image of peaceful protesters against the “coup”.

Muslim Brotherhood spokesman Ahmed Aref said that in reviewing the Al-Qeddissin Church bombing before the January 25 Revolution, they had not “ruled out the possibility that violence in Sinai is orchestrated to further oppress and marginalise its people and to strengthen the shaky situation of military coup leaders against the will of the people who are protecting their choices and seeking a decent life.”

Militants had planted a landmine on the international road between Sheikh Zuweid and Rafah, which exploded on Sunday metres away from an armoured vehicle. While the vehicle was unharmed, an army source stated that one of the militants died in the explosion.

At dawn on Monday unknown gunmen fired a rocket at a security building under construction, reported state news agency MENA.

“A 17 year old guard died in the attack while a 12 year old boy was injured,” said Ahmed Abo Deraa, a Sinai reporter.

The area near Karm Abu Salem border crossing witnessed an exchange of fire between armed men and military personnel that lasted for more than half an hour.

The Israeli army reportedly raised its alert levels on Sunday night after the attacks in Sinai and after increasing reports of potential attacks on Israeli targets by Jihadists, according to state agency MENA.

The Egyptian Organisation for Human Rights (EOHR) expressed concern regarding violence in Sinai, stating that attacks on military installations are a threat to Egyptian national security.

EOHR blamed the Brotherhood for the attacks, basing their claim upon statements by Brotherhood leaders that attacks in Sinai will stop when Morsi is reinstated as president.

“EOHR demands the immediate arrest of those who incite violence in Sinai…and presenting them to justice,” the statement read.

EOHR Chairman Hafez Abo Seada said that the army and the government should deal strictly with anyone who threatens unarmed citizens and national security in Sinai.