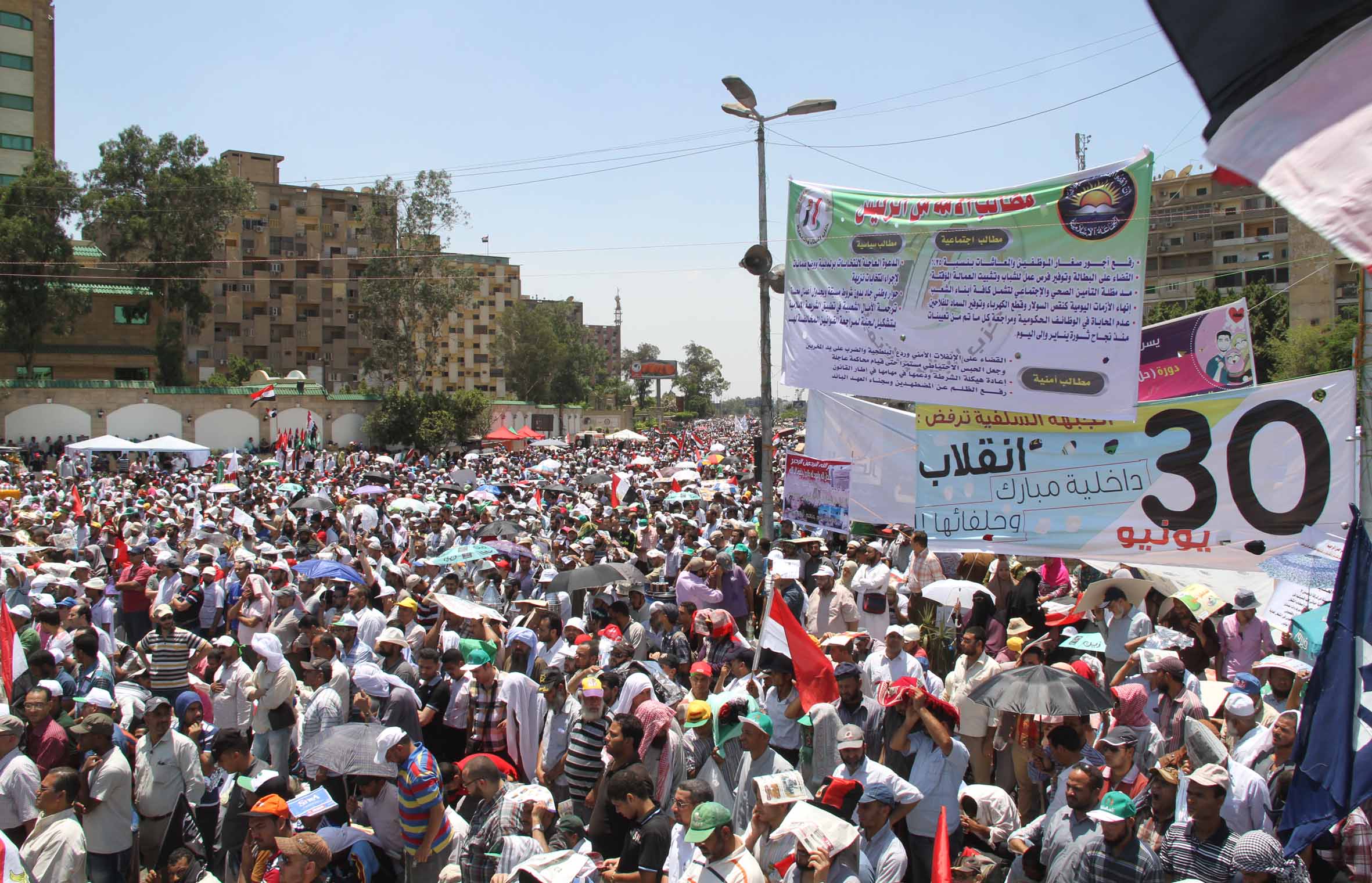 The National Coalition for Legitimacy said on Wednesday that it calls on all individuals and institutions to abide by the constitution and respect the democratic process that elected President Mohamed Morsi.

The coalition, which includes the Freedom and Justice Party, the Muslim Brotherhood, Al-Watan Party, Al-Wasat Party, and Al-Jamaa Al-Islamiya, held a press conference at the pro-Morsi sit-in at Rabaa Al-Adaweya to declare their support for the president.

The coalition repeatedly called on the military to stand by its pledge to protect the nation and remain politically neutral.

“We hear the armed forces will protect those in Tahrir, but what about the citizens here,” the speaker at the press conference said. “Do we all not have national ID cards? Are we not Egyptians?”

The statement attacked the opposition for infringing on the democratic process that it everyone participated in during the 2012 presidential elections. It reiterated that the opposition did not have the right to disregard the legitimacy that Morsi had gained democratically.

“There is no way that we will return to square one or allow for anything unconstitutional,” the statement read.

A moment of confusion occurred after the speaker made a verbal jab at Minister of Defence Major General Abdul Fatah Al-Sisi, saying: “All Egyptians must abide by the constitution, and the first one who must is Al-Sisi.” The crowds, caught off guard by the mention of Al-Sisi, did not clap or applause in response to this implicit attack on the minister. The speaker quickly retracted his statement and apologised.

“This is my fault, I apologise, this statement is not a part of the official statement but I am seeing our men die, and I could not help it,” the speaker said.

The statement extended its condolences to the families of those who died in overnight during clashes near Cairo University.

The press conference ended with the crowds chanting against the Ministry of Interior for what they believed was their failure to prevent the Cairo University clashes.

The protesters refrained from commenting on the position of the armed forces toward the current political crisis, however many stated that it was a dangerous situation.

“We are with the army as long as it respects our legitimacy,” protester Alaa Zenhom said. “We consider it an institution as any other that should not do wrong, specifically in this case, by going against the legitimacy of the democratic process.”

Zenhom warned that chaos would ensue if institutions, including the armed forces, do not follow the democratic path that has been established. He added that military intervention would create “a dangerous precedence of unconstitutionally and illegitimately removing the president.”

Protester Awad Noaman said the position of those in Rabaa Al-Adaweya toward the armed forces would remain neutral until the Ministry of Defense releases a statement clarifying its stance.

“If they are against legitimacy, we will die here. If they are in support of it, then they are to protect the nation and make sure they do not take any political sides,” he said.