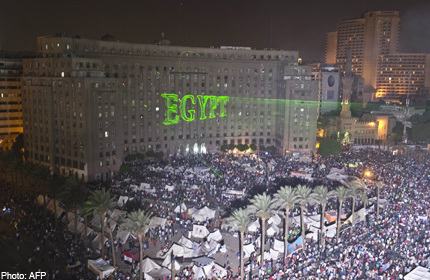 The National Salvation Front (NSF) and Tamarod movement called on the armed forces to protect the Egyptian people from “brute” aggression and prevent bloodshed on Wednesday.

In a joint statement, released almost three hours before the deadline for the armed forces’ ultimatum expires, the two opposition movements pointed out the armed forces’ national duty towards preserving the state’s security and stability and protecting the “peaceful” people from “those who terrorise and threaten them.”

In their statements, both groups said: “claims [describing] the army’s protection of Egyptian souls as a military coup” are “nonsense”. They added that those who make such claims “disregard” the dangerous nature of the current situation on the ground.

The groups called on the armed forces to sponsor a national dialogue to put forward a future roadmap that would allow for a democratic transition of power.

Rania Azab, ElBaradei’s spokeswoman, said she had “no information” regarding the matter. NSF spokesman Ahmed Al-Hawary said although he had received reports from the Front regarding the meeting, he could not independently confirm it took place.

“The Front and Tamarod consider as martyrs those who died on the field of sacrifice from treachery incited by [President] Mohamed Morsi,” the statement read. “Morsi has refused to bow to the people’s will… [and refused] to step down under the pretense that he is preserving legitimacy.”

The groups reiterated their view that Morsi’s “legitimacy” had been lost the moment he “betrayed” the duties he was trusted with, and “violated the laws, the constitution, the judiciary and the freedom of the media.”

“We [affirm that] Morsi’s legitimacy [was lost] when he incited his supporters against the peaceful protesters occupying Egypt’s squares,” the statement read.

Morsi addressed the nation in a televised speech Tuesday night, vowing to protect the “legitimacy of the people’s will,” reflected in their electing him president and approving the 2012 constitution, “even if it cost [him] his life.”