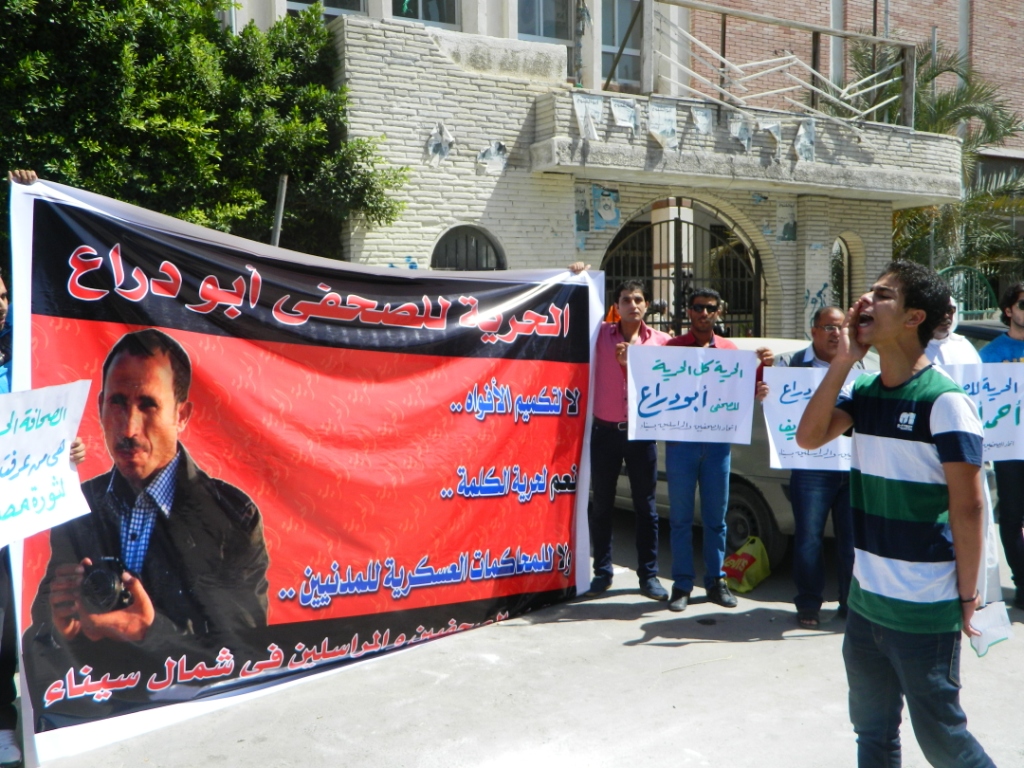 The Federation of Journalists and Correspondents in Northern Sinai organised a protest Tuesday afternoon in solidarity with detained journalist Ahmed Abu Deraa. Abu Daraa works as a North Sinai correspondent with both Al-Masry Al-Youm and ON TV.

A second demonstration is scheduled to be held Wednesday in front of the Al-Galaa Military Court in Ismailia, to protest charges leveled against Abu Deraa by the military prosecutor, among them claims that he took photographs without a permit of locations and facilities which had been deemed off limits to citizens. Other accusations included being present without a permit in military locations deemed off limit to citizens.

The protest, which took place in front of the North Sinai Legislative Council headquarters in central Al-Arish, was attended by members of the Federation of Journalists and Correspondents, in addition to a number of tribal leaders, activists and representatives from different political parties and revolutionary movements.

Abd Al-Qadr Mubarak, Chairman of the Federation, stated that pressure would increase the longer Abu Daraa remained in custody. He stated that a large press conference would be held in Cairo, attended by all of the country’s domestic media outlets, in addition to a number of foreign stations, to explain in detail the circumstances of Abu Daraa’s detainment.

Khaled Arafat, representative of the Al-Karama  (Dignity) Party, said that political forces in the region stood in solidarity with Abu Daraa, rejecting his transfer to a military court, “particularly after the conclusion of the 30 June revolution.”

Saeed Al-Qasas, representative of a number of revolutionary movements in Northern Sinai, stated that bringing citizens in front of military courts was unacceptable. He further reiterated demands made to allow citizens to live peacefully and enjoy the “benefits and freedom of honour and social justice.”

Ahmed Salim, director of the Al-Ahram newspaper office in North Sinai, called on Defense Minister General Abdel Fatah Al-Sisi to help bring an end to the current crisis saying that, “we trust our armed forces to protect the country, and we are confident that they will not transform into an institution aimed at restricting people’s freedoms.”

Mustafa Singar, North Sinai correspondent with Shorouk News, stated that, “we stand today to express our support for freedom of speech, along with the freedom of our colleague Abu Deraa. We have found that once again that a pretext has been created to restrict freedoms and try civilians in military courts. This is something we refused to accept before the 25 January Revolution, and is not something that we will accept now. Ahmed’s freedom represents the freedom of all journalists”.

Mohamed Salim, Sinai correspondent with Al-Messa, demanded that the Journalists Syndicate intervene and provide legal counsel for Ahmed Abu Deraa. He stated that the Syndicate should seek to protect all journalists, and not just its own members, saying that the ability to join the syndicate should be extended to all those who do journalist work.

Ahmed Abu Deraa, a member of the Federation of Journalists and Correspondents in Sinai, was arrested 4 September 2013 and presented in front of a military court. A close confident of Deraa gave a statement during the protest saying that, “the details of his case remain unclear and unjustified, while his detention sends a clear message to all journalists that they should shut their mouths and put away their pens. They did this thinking that prison would deter us, and that being brought to trial would scare us. The plight of Abu Deraa is not just that of his own, but that of all journalists and those who support freedom of information.”